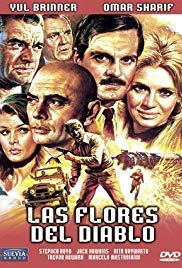 Storyline:
In an attempt to stem the heroin trade from Iran, a group of narcotics agents working for the UN inject a radioactive compound into a seized shipment of opium, in the hopes that it will lead them to the main heroin distributor in Europe. Along the way, they encounter a mysterious woman doing her own investigating of the smuggling operation. Together, they follow the trail as it leads them through the back alleys and luxury resorts of Europe.
Written by
Jean-Marc Rocher <[email protected]>
User Reviews: Poppies Are Also Flowers is an all star amalgamation of two previous films on the narcotics trade. Sharp eyed fans of the cinema will spot plot elements from those two Forties era films, To The Ends Of The Earth and Port of New York. Of course both those films were infinitely better.

Still a whole bunch of international stars lent their names and got a fat paycheck for this muddled episodic film which tries to make E.G. Marshall an action star. Talk about ridiculous.

Best in the film by far are Yul Brynner as an Iranian general and Rita Hayworth as the dope addicted wife of Gilbert Roland who is one of the villains. Roland plays it rather straight and that ever present twinkle that I love in him is missing.

The filming was done on actual locations including some of the harder to reach regions of Iran. Of course that was back in the day of the Shah’s pro-western government and you can see photographs of the Shah in some of the shots. I also liked Hugh Griffith as I always do with those wild eyes of his, the wildest this side of Jack Elam. Griffith just dusts off his Sheik Ilderim portrayal from Ben-Hur and hams it up to beat the band. There wasn’t much else the man could do, he knew he was in a Thanksgiving special.

Storyline:Nino Culotta is an Italian immigrant who arrived in Australia with the promise of a job as a journalist on his cousin's magazine, only to find that when he gets there the magazine's folded, the cousins done ...