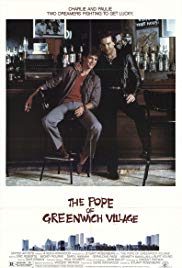 Storyline:
Charlie and his troublesome cousin Paulie decide to steal $150000 in order to back a “sure thing” race horse that Paulie has inside information on. The aftermath of the robbery gets them into serious trouble with the local Mafia boss and the corrupt New York City police department.
Written by
Grant Hamilton <[email protected]>
User Reviews: Watching ‘The Pope Of Greenwich Village’ almost twenty years after it was released you can’t but help think a)what a great movie it is, and b)what the hell happened to Mickey Rourke and Eric Roberts, two of the most exciting actors of the 1980s? Rourke drifted off into boxing and b-grade action movies, and apart from some great cameos in movies by Sean Penn, Steve Buscemi and Vincent Gallo (‘The Pledge’, ‘The Animal Factory’, ‘Buffalo ’66’ respectively) has almost been forgotten by the current generation of movie fans, and Roberts has also made way too many bad straight to video action films and is regarded as a joke by most people. It’s so sad what happened to their careers, but this movie sees them both at their peak, and boy, they were both GREAT actors! The movie is directed by Stuart Rosenberg who made my all time favourite movie ‘Cool Hand Luke’ back in the 1960s, and Michael Cimino (‘The Deerhunter’) also worked on it uncredited. I don’t know if this means it was a troubled shoot, I don’t know the background details, but if that’s the case it certainly doesn’t show on screen. Some people find this movie too rambling and anecdotal, but I loved it. It’s a superior character driven buddy movie (which reminds me in places of Cimino’s earlier overlooked ‘Thunderbolt And Lightfoot’). Rourke and Roberts are dynamite together, and I would recommend this movie for them alone, but the supporting cast includes a credible turn from Daryl Hannah and a whole bunch of great character actors – M. Emmett Walsh, Burt Young, Val Avery, Jack Kehoe, and especially Kenneth McMillan (who later appeared with Roberts in another great "forgotten" 1980s movie ‘Runaway Train’) who plays a heartbreaking role as the poor guy who gets enmeshed in Roberts and Rourke’s doomed robbery plan. ‘The Pope Of Greenwich Village’ deserves to be rediscovered. Any film buff who appreciates good acting will enjoy it, and youngsters who aren’t aware of Mickey Rourke, or who regard Eric Roberts as little more than a figure of fun should check it out and be amazed.