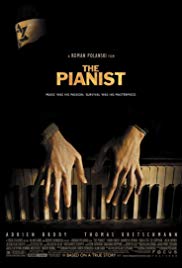 Storyline:
In this adaptation of the autobiography “The Pianist: The Extraordinary True Story of One Man’s Survival in Warsaw, 1939-1945,” Wladyslaw Szpilman, a Polish Jewish radio station pianist, sees Warsaw change gradually as World War II begins. Szpilman is forced into the Warsaw Ghetto, but is later separated from his family during Operation Reinhard. From this time until the concentration camp prisoners are released, Szpilman hides in various locations among the ruins of Warsaw.
Written by
Jwelch5742
User Reviews: This wrenching yet ultimately uplifting fact-based drama won Adrien Brody his Academy Award and finally made him a star (along with his gracious yet heartfelt Oscar speech and That Kiss 🙂 — rightly so, since title character Wladyslaw Szpilman is a challenging role in so many ways! It’s not easy to command the screen when your character often has to be passive, deliberately trying not to draw attention to himself to keep from falling into Nazi hands in war-torn Poland, but Brody pulls it off. It helps that Brody is absolutely stellar at acting with his eyes, plus his body language speaks volumes; these fill in the emotional cracks, especially in scenes where Szpilman, alone and in hiding, can’t speak or even move around much for fear of giving himself away. (Brody is the youngest actor to date to win the Best Actor Oscar, BTW, having gotten his little gold man only a month before his 30th birthday.) While there’s no lack of haunting scenes, thanks to the deservedly Oscar-winning work of director Roman Polanski and screenwriter Ronald Harwood, the one that always gets me is the one where Szpilman discovers the apartment serving as his latest `safe house’ has a piano. We see Szpilman sit at the piano; we see him in a head-and-shoulders shot, shoulders moving; we hear piano music and gasp as we fear his love and longing for music is about to give him away — and then we see his hands moving in the air just above the keyboard and realize, with both relief and a pang of regret, that the music is only in Szpilman’s head. Terrific as the other 2002 Best Actor nominees were, now that I’ve seen THE PIANIST (as well as the fascinating making-of documentary on the DVD’s flip side, showing what a physically and emotionally grueling experience Brody’s job often was), I’d be really p***ed off if anybody but Adrien Brody had won! (Besides, the rest of the 2002 Best Actor nominees already won Oscars — this time it was dark horse Brody’s turn! 🙂

Storyline:After a routine drug deal turns bad, Heather is arrested and taken to a mental institution. Inside the asylum, Heather's mind plays tricks on her, and she becomes convinced that a plot is under way to murder...