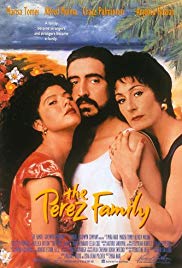 Storyline:
In an attempt to secure a sponsor, an unlikely group of Cuban refugees become a “family” as the U.S. Immigration and Naturalization Service gives families priority over others. In the process, a political prisoner who hasn’t seen his wife for twenty years and a disaffected sugarcane cutter fall in love. An excitable brother and a lovestruck cop contribute to the general confusion. The inevitable humorous romantic entaglements ensue as a final confrontation is set up.
Written by
Tad Dibbern <[email protected]>
User Reviews: This is a cute little film starring Marisa Tomei (Wild Hogs, My Cousin Vinny) and Alfred Molina (Spider-Man 2, Frida) as Cubans who came over on the Marial boat lift in the 80s.

Juan Raul Perez (Molina) is married to Carmela (Anjelica Huston), who came to America 20 years previous while Juan languished in a Cuban prison. He is stuck in an immigration facility with Dorita Evita Perez (Tomei), who is not related to him, but pretends to be his wife so they can get out. They even pick up a father and a son in their attempt at freedom.

While Juan is trying to escape and reunite with Carmela, her brother, Angel (Diego Wallraff) is trying to keep them apart. Further complicating the adventure is a cop, Lt. John Pirelli (Chazz Palminteri), who is falling in love with Carmela.

It is a sweet little comedy that Tomei does so well and worth spending some time with.