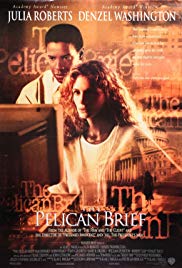 Storyline:
Two Supreme Court Justices have been killed. Now a college professor, who clerked for one of the two men and who is also having an affair with one of his students, is given a brief by her that states who probably wanted to see these two men dead. He then gives it to one of his friends, who works for the FBI. When the FBI director reads it, he is fascinated by it. One of the president’s men who read it is afraid that if it ever got out, the president could be smeared. So he advises the president to tell the director to drop it, which he does. But later the professor and the girl were out and he was drunk and when he refused to give her the keys, she stepped out of the car. When he started it, it blew up. She then discovers that her place has been burglarized and what was taken were her computer and her disks. Obviously, her brief has someone agitated. She then turns to her boyfriend’s friend at the FBI. He agrees to come meet her but before he does, someone shoots him and takes his …
Written by
[email protected]
User Reviews: You gotta love Alan Pakula. His Pelican Brief is true to the source material but manages to complement it with artfulness learned from Hitchcock and the events portrayed in All The President’s Men (also directed by Pakula).

The result is a thriller which never has to resort to the hackneyed or the obvious. Even the chase scene in a car park manages to be a little different.

He has casted brilliantly (perhaps Fletcher Coal should have been older?) but his masterstroke is commisioning James Horner to provide the score. At times sparse and at others boldly chromatic it jangles the nerves as Julia and Denzel duck and weave their way through a maze of unease.