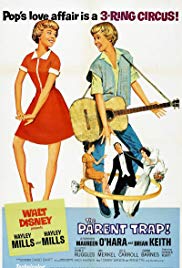 Storyline:
Hayley Mills plays twins who, unknown to their divorced parents, meet at a summer camp. Products of single parent households, they switch places so as to meet the parent they never knew, and then contrive to reunite them.
Written by
Stewart M. Clamen <[email protected]>
User Reviews: This is an agreeable updating from an E. Kastner’s story , it deals about two twins little girls (Hayley Mills). When they are in summer holidays and after several antics each other , discover the surprise which they are twin sisters and then they plot change characters with their different parents (Mauren O’Hara , Brian Keith) who are disjointed since the divorce and the girls have been separately raised . The father is going to marry a young woman (Joanna Barnes) and the eleven-years-old girls scheme the parents reconciliation by making impossible life of the father’s bride .

The picture contains enjoyable comedy , humor , tongue-in-cheek and being pretty entertaining . This classical Disney comedy was remade in 1998 with Lindsay Lohan and previously adapted to British cinema in a movie titled : ¨Twice upon a time¨ (1954) . Hayley Mills acting is sympathetic and amusing . Hayley plays two sisters and she makes it splendidly . Hayley starred two sequels for Television (1986, 1989). Susan Henning took on the role as Hayley Mills’ body double for several of the twin shots in the film , as part of her contract, she signed away her rights to be credited . The screenplay originally called for only a few trick photography shots of Hayley Mills in scenes with herself; the bulk of the film was to be shot using a body double. When Walt Disney saw how seamless the processed shots were , he ordered the script reconfigured to include more of the special effect . Mauren O’Hara and Brian Keith are magnificent as parents in similar roles later starred by Natasha Richardson and Dennis Quaid . Joanna Barnes as the unpleasant fiancée is very well , in the remake she played the bride’s (incarnated by Elaine Hendrix) mother . The movie will appeal to family comedy enthusiasts . Rating : Amusing and enjoyable . Well worth seeing .