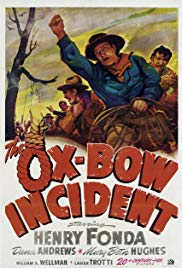 Storyline:
Two drifters are passing through a Western town, when news comes in that a local farmer has been murdered and his cattle stolen. The townspeople, joined by the drifters, form a posse to catch the perpetrators. They find three men in possession of the cattle, and are determined to see justice done on the spot.
Written by
David Levene <[email protected]>
User Reviews: Before "12 Angry Men" there was "The Ox-Bow Incident," a bleaker and never less than fascinating exploration of the nature of mob violence. Unlike "12 Angry Men," this film has no clear-cut heroes. It takes place in a more primitive, wilder time and location, and the principal question at the crux of this movie’s conflict is whether or not three suspected cattle thieves should be punished without due legal process. A small group is in favor of letting the frontier town sheriff handle the situation, while a much larger group smells only blood (and in some cases are motivated by personal vengeance) and convince themselves of the suspects’ guilt without listening to any of the evidence. It’s quite a frightening movie in its own way, and it has a stark look at odds with the average studio film being churned out at the time (1943). Henry Fonda is quite good, as usual, in the closest thing the movie has to a main character, but it seems pointless to single him out in what is obviously such an ensemble effort, and in a movie that only lasts a mere 75 minutes or so and has such a large cast, each actor manages to color his/her character with delightful details, sometimes with no more than a single line of dialogue or one reaction shot.

"The Ox-Bow Incident" is a fantastic film. I don’t think it’s well-remembered now, but I’m thrilled to see it on DVD and hope that it will be rediscovered.