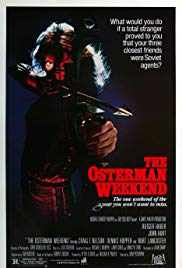 Storyline:
In this adaptation of the ‘Robert Ludlum’ (q.v) novel, the host of an investigative news programme has been convinced by the C.I.A. that the friends and associates he’s invited to weekend with him in the country, are actually engaged in a nefarious conspiracy which threatens national security,
Written by
Keith Loh <[email protected]>
User Reviews: The Robert Ludlum book of the same name is excellent, very tense and very well written. I waited ages for this film to come along at the right price (25p off ebay, ha ha), but how disappointed I was when I finally saw it. Maybe it wouldn’t be a bad film if it wasn’t based on a book, but it is, and a great book at that. Therefore, I have to compare the film with the original as the two can’t be separated. Relative to the book, the film is, frankly, rubbish I’m sorry to say. I had such high expectations, but the film bore such little resemblance to the book that had I not known it was called "The Osterman Weekend", I would never have guessed that it was based on the book of the same name.

I gave this film 5/10 simply because I made it through to the end (and Rutger Hauer and John Hurt have done some great stuff), but it was more out of morbid curiosity as to how much more they could butcher the book than for any entertainment value. This was a film that was a product of its time (replete with cheesy music and bad acting) and it hasn’t aged well. I’m glad I bought it for 25p because any more and I would’ve considered it a waste of money.

If it comes up on TV and you have 90 minutes burning a hole in your life, watch it – it isn’t dreadful, but it’s certainly not great. If you’ve read the book and are hoping to see it brought to life, or think that you’re about to watch another Sam Peckinpah classic, give it a miss, it really isn’t worth it.