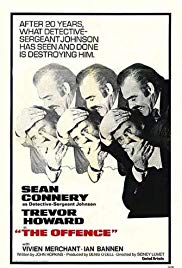 Storyline:
In Sidney Lumet’s harrowing portrayal of police brutality, Detective Sergeant Johnson has been with the British Police Force for 20 years. In that time, the countless murders, rapes and other serious crimes he has had to investigate has left a terrible mark on him. His anger and aggression that had been suppressed for years finally surfaces when interviewing a suspect, Baxter, whom Johnson is convinced is the man that has been carrying out a series of brutal attacks on young girls. Throughout the interview Johnson brutally beats Baxter and during this ordeal he inadvertently reveals that the state of his own mind is probably no better than that of the offenders who committed the crimes that disgusted Johnson originally.
Written by
David Claydon <[email protected]>
User Reviews: The Offence is directed by Sidney Lumet and adapted to screenplay by John Hopkins from his own play titled This Story of Yours. It stars Sean Connery, Ian Bannen, Trevor Howard and Vivien Merchant. Cinematography is by Gerry Fisher and music by Harrison Birtwistle.

Detective Sergeant Johnson (Connery) has been with the British Police Force for two decades, in that time he has been witness to countless murders, rapes and other serious crimes. The images, the people he has had to deal with, have left a terrible mark on him. When suspected child sex attacker Kenneth Baxter (Bannen) comes up for interrogation by Johnson, his mind starts to fracture and he loses control, unleashing a dark side that comes out both physically and mentally.

You wouldn’t think it possible for Lumet and Connery to have a hidden gem in their respective career outputs, but The Offence is very much just that. An unnerving skin itcher with an upsetting narrative core, The Offence was a commercial flop. It barely got released across the globe and only found its way onto home format release in the last 10 years. The film only got made after Connery struck a deal with United Artists, he would only return as James Bond for Diamonds Are Forever if they backed him for a couple of projects. One of which was The Offence, so with free licence to play Johnson, and his choice of Lumet in the directing chair, Connery got the film made.

Set with a bleak concrete back drop of a "New Town" (cheaply built monstrosities the government knocked up to ease the housing issues), The Offence is a fascinating blend of police procedural and psychological drama. It poses many questions, and thrives on ambiguity to the point repeat viewings are a must, but in the main what shrieks out is the thematic point of one mans harrowing employment taking its toll on he himself. Is it possible that you can only chase and be amongst monsters yourself for so long before you become one of that number? It’s invariably hard to recommend the film as high entertainment, a comfy night in by the fire this film is not. But as film art, a searing character study and acting supreme, it scores impressively high whilst tantalisingly tickling the cranium.

It’s fair to say it’s very dialogue heavy, and Lumet as polished a director as he is, keeps it grainy, revelling in the bleakness of the story. Connery has never been better, utterly compelling, a brooding force of nature and as committed to role as he has ever been. Nor, too, arguably, has Bannen, the scenes shared between the two men are lessons in acting as they portray two warped minds bouncing off each with an unsettling force that grips us round the throat and refuses to let go long after the credits have rolled. Howard steps in to add a touch of mature quality, he too bringing the best out of Connery in the scenes they share, while Merchant as Johnson’s "on the outside" wife, is raw and heartfelt.

You can’t pigeon hole The Offence, it’s very much one of a kind and it demands to be tracked down by serious film fans. From the low key score and foreboding 70s setting, to the gripper of a denouement, The Offence is an essential piece of British cinema. 9.5/10

Storyline:In a future world, mankind is about to be wiped out by a super virus, Hiding underground people only have one hope, That a meteorite will save them with a possible cure. Only one thing stands in their way fr...

Storyline:Huang Fei-Hung, famous Chinese boxer, teaches his martial arts at Pao Chih Lin Institute, in Canton. Gordon is a European businessman, dealing in import and export, who's looking for a good bodyguard - for w...

Storyline:Christoph is training with the Viennese special police unit WEGA, a daily life of testosterone, fighting, and peer pressure. When he shoots a man during an operation, allegedly in self-defense, his colleague...

Storyline:In England during World War II, a repressed dressmaker and her sister struggle looking after their seventeen-year-old niece, who is having a delusional affair with an American soldier.User Reviews: I know a ...

Storyline:The international smash hit sensation following the lives of students at New York's High School For The Performing Arts as they navigate their way through the highs and lows, the romances and the heartbreaks...