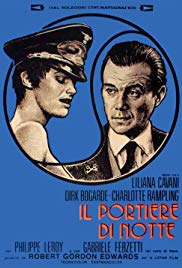 Storyline:
Thirteen years after WWII a concentration camp survivor (Rampling) and her tormentor, currently the night porter at a Vienna hotel, meet again and fall back into their sado-masochistic relationship.
Written by
Ed Sutton <[email protected]>
User Reviews: In some ways this film is still very shocking. Although it is neither violent nor vulgar, the situation is disturbing and violent -actually it’s something we DON’T see with our eyes: a psychological violence.

Some years after the end of Second World War, a woman meets in a hotel her jailer during her concentration camp period. He was an SS officer, now he’s a night porter. With him she re-starts a relationship made of attraction and sadomasochism.

The film is shocking because it describes an insane situation, led by two insane people. These are the disturbing elements of the film, because spectators don’t feel well in seeing that. The atmosphere has something very icy and miserable. I think it’s precisely Liliana Cavani’s goal: a study of insanity, without self-indulgence.

After 30 years "Night porter" remains a gem. An intelligent movie, full of provocation. Charlotte Rampling and Dirk Bogarde are extraordinary.

Storyline:Emanuelle (Lindt) is out to avenge her sister (Gori), who committed suicide after escaping from her sadistic lover Carlo (Eastman). So she chains him up in her basement, drugs him, and forces him to watch he...

Storyline:A family-run shop that sells everything you need to take your own life finds it hard to focus on business after a new baby -- one who makes everyone around him happy -- is born into the family.User Reviews: ...

Storyline:In this fourth series of the hell-raising Wishmaster, the Djinn unleashes his undying love and three wishes on a beautiful new victim named Lisa, whose crucial third wish is one that the Wishmaster cannot fu...