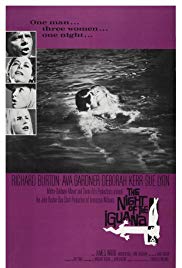 Storyline:
The Rev. T. Lawrence Shannon has been living in Mexico for two years, working as a tourist guide for a cut-rate travel agency. Shannon lost his church and was defrocked after taking liberties with one of his parishioners. He’s now accompanying a group of middle-aged ladies from Texas whose leader, Judith Fellowes, is keeping a close eye on her teenage ward, Charlotte Goodall, who definitely has an interest in the former priest. After Charlotte and Shannon spend the night together, Fellowes is out to have him fired and to keep her from communicating with his employer, Shannon strands them at a remote hotel run by his good friend Maxine Faulk. It’s the arrival of Hannah Jelkes and her elderly grandfather that has the greatest impact however. Her approach to life and love forces Shannon to deal with his demons and re-evaluate his life.
Written by
garykmcd
User Reviews: John Huston brought his crackpot vitality to this screen version of a not terribly well-known Tennessee Williams play. On stage it was epigrammatic and full of William’s faux poetry but on film it has a nice line of lewdness running through it. Before this film I don’t think the cinema knew what to do with Richard Burton but here he’s perfectly cast as a defrocked clergyman working as a tour guide in Mexico. There is a twinkle in his eye and he’s good fun. Ava Gardner, too, is well cast as the blowsy hotel owner, (she plays the part like Ava Gardner gone to seed). Only Deborah Kerr is a bit of a bind in this one. She supplies the faux poetry as the genteel artist traveling with her ancient grandfather. (Margaret Leighton played the part on Broadway and won a Tony).

The rest of the largely female cast is made up of Sue Lyon as a slightly older Lolita type and Grayson Hall as an hysterical, thinly veiled lesbian, (it was 1964, after all). The superb black and white photography is by the great Mexican cameraman Gabriel Figueroa. It’s a very ‘opened-out’ version of a play, not theatrical at all, and while lively, it never insults our intelligence.