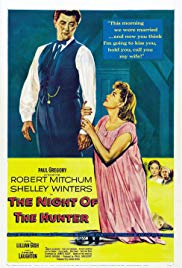 Storyline:
It’s the Great Depression. In the process of robbing a bank of $10,000, Ben Harper kills two people. Before he is captured, he is able to convince his adolescent son John and his daughter Pearl not to tell anyone, including their mother Willa, where he hid the money, namely in Pearl’s favorite toy, a doll that she carries everywhere with her. Ben, who is captured, tried and convicted, is sentenced to death. But before he is executed, Ben is in the state penitentiary with a cell mate, a man by the name of Harry Powell, a self-professed man of the cloth, who is really a con man and murderer, swindling lonely women, primarily rich widows, of their money before he kills them. Harry does whatever he can, unsuccessfully, to find out the location of the $10,000 from Ben. After Ben’s execution, Harry decides that Willa will be his next mark, figuring that someone in the family knows where the money is hidden. Despite vowing not to remarry, Willa ends up being easy prey for Harry’s outward …
Written by
Huggo
User Reviews: ‘The Night Of The Hunter’ is recognized by most critics and hard core film buffs as one of the most extraordinary movies ever made, but sadly it’s still frequently overlooked by the many movie fans, probably because it’s so difficult to categorize. Yes, it’s a thriller but it’s also a child’s nightmare. A Noir but also a fable. Robert Mitchum gives one of his very best performances as Harry Powell, the charming but evil preacher with "love" tattooed on one hand, "hate" on the other. Powell is one of the most memorable screen villains of all time, and ‘The Night Of The Hunter’ is worth watching just for Mitchum, who is mesmerizing. Shelley Winters is surprisingly effective as the widow Powell woos, Peter Graves has a small role at the beginning as her first husband, and Lillian Gish plays the saintly Ms. Cooper, guardian of unwanted children. Because this movie isn’t set in isn’t the "real world" many viewers don’t know exactly how to react to it. Charles Laughton’s small town America is a stylized, dreamlike place, in some ways not unlike David Lynch’s twisted world depicted in ‘Blue Velvet’ and ‘Twin Peaks’. It also reminds me of Flannery O’Connor’s Gothic South in her classic novels ‘Wise Blood’ and ‘The Violent Bear It Away’. Some of the scenes involving Powell menacing Winters’ children deliberately invoke James Whale’s ‘Frankenstein’, and the sequence depicting the children’s journey down the river is charming but blatantly artificial. While I’m a big fan of "outsider" film makers like Russ Meyer, Coffin Joe and Alejandro Jodorowsky, I also greatly admire those who work within the system but still manage to subvert Hollywood with doses of surrealism. I’m thinking of movies such as ‘Kiss Me Deadly’, ‘Shock Corridor’ and ‘The Manchurian Candidate’. Each of these films are unique but they also remind me of each other and of ‘The Night Of The Hunter’. I highly recommend them all and wish that there were a lot more movies like them today. ‘The Night Of The Hunter’ is essential viewing for anybody interested in American movies!