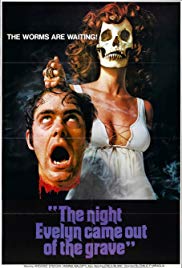 Storyline:
A wealthy English lord is suffering a mental breakdown following the death of his red-headed wife, Evelyn, whom he feared was cheating on him. He tours local bars and dives, scouring for lovely red-heads willing to come back to his decaying castle in the country, where he seduces them, then tortures and kills them. His friend the doctor talks him into marrying again to help heal his slowly-rotting mind, which he does–but are the doctor’s orders really what he needs?
Written by
EllenRipley112
User Reviews: This film is known as ‘The Night Evelyn Came Out of the Grave’, ‘The Night She Arose from the Tomb’ and it’s original title ‘La Notte che Evelyn Usci dalla Tomba’ (1971).

The film is a horror and mystery with some sexploitation. A man’s wife recently died and he was afraid she was cheating on him all along. He’s starting to drive himself insane with these thoughts. He goes out and lures young women to his castle and has his way with them by having sex with them then torturing the women. His doctor is trying to help him by "freeing his mind" from his insanity but is this cure what he really needs?

It’s a somewhat entertaining film with seances, a ghost, a castle, torture chamber, insanity, and a possible hope for a cure. He is very sadistic madman towards the women who only wanted to have some kinky fun with him.