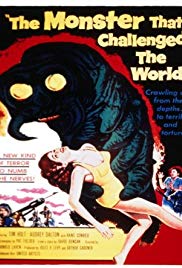 The Monster That Challenged the World (1957)

Storyline:
An earthquake in the Salton Sea unleashes a horde of prehistoric mollusk monsters. Discovering the creatures, a Naval officer and several scientists attempt to stop the monsters, but they escape into the canal system of the California’s Imperial Valley and terrorize the populace.
Written by
Jeremy Lunt <[email protected]>
User Reviews: This tidy little "B" thriller features all the usual elements common to genre films of the fifties; a lantern jawed hero determined to get to the bottom of all the trouble, the stern scientist who provides the rationale for the beastliness and the comely love interest who provides the distaff side of the equation. That "The monster that challenged the world" succeeds in delivering an at times genuinely frightening experience is due, I think,to a great script and film makers who treat the material with respect. To do any less is a betrayal of the audience,in my view. The film is peopled with understated performances, especially those of Hans Conreid in a rare dramatic role and Tim Holt,a stalwart of "B" westerns, as the no nonsense Commander Twillinger. The monster of the title may not be as menacing as, say, Alien, but it provides enough creepy moments to satisfy all but the most jaded film goers. Nice photography and crisp editing add to the overall effect. "The monster that challenged the world" made almost fifty years ago, remains a fresh and satisfying example of the genre. Recommended.