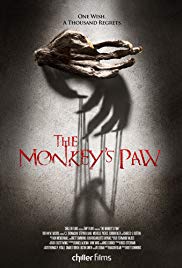 Storyline:
The film centers on Jake Tilton, who acquires a mystical “monkey’s paw” talisman that grants its possessor three wishes. Jake finds his world turned upside down after his first two wishes result in co-worker Tony Cobb being resurrected from the dead. As Cobb pressures Jake into using the final wish to reunite Cobb with his son, his intimidation quickly escalates into relentless murder– forcing Jake to outwit his psychotic friend and save his remaining loved ones.
Written by
monkey
User Reviews: Jake (C. J. Thomason) is given a monkey’s paw that grants three wishes. After the first two wishes leave his friend Cobb (Stephen Lang) undead, Cobb pushes Jake to make a final wish.

There have been many films based on the short story of the same name by author W. W. Jacobs, going back to at least 1933. Each is a little different, often because of the time period in which they are set. This one is a bit different because it features two friends rather than the traditional pair of mother and son. (George A. Romero has said this story could only be told in a short film or an anthology, but clearly many have tried to prove him wrong.)

This one has more action than previous versions, and really makes the story its own. Whether it is better or not is up to the viewers. When compared to some adaptions (such as "Deathdream"), it seems unlikely this will develop a following. But perhaps?