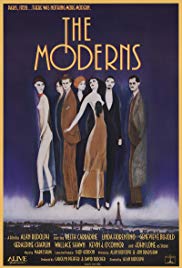 Storyline:
Nick Hart is a struggling American artist who lives amongst the expatriate community in 1920s Paris. He spends most of his time drinking and socializing in local cafés and pestering gallery owner Libby Valentin to sell his paintings. He becomes involved in a plot by wealthy art patroness Nathalie de Ville to forge three paintings. This leads to several run-ins with American rubber magnate Bertram Stone, who happens to be married to Hart’s ex-wife Rachel.
Written by
measham
User Reviews: Nick Hart (Keith Carradine) is an ex-patriot American painter who lives in Paris in the 1920’s. He picks up some money selling caricatures but is very poor. An art gallery owner, Libby (Genevieve Bujold) is sympathetic but can’t muster up many sales for Nick’s work. Now, a wealthy divorcée. Nathalie (Geraldine Chapman) commissions Nick to make copies of some expensive paintings, as a sort of plot against her ex-husband. Reluctantly, Nick agrees. Complicating matters further is the fact that when Nick frequents his favorite bar, which is quite often, he runs into a beautiful, beautiful woman named Rachel (Linda Fiorentino) who happens to be married to a rich American businessman, Bertram (John Lone). Wouldn’t you know, Bertie is a sadist and controls Rachel with an iron fist. He loves to do things like shave under Rachel’s arms with a straight razer! So, two things are paramount to Nick. Will he begin to sell his art and will he be able to win Rachel away from her husband? This is quite a lovely film with a very great cast. Carradine does a fine job as the main character while Fiorentino is extremely lovely and touching. But, its Lone who practically steals the show, with his terrifying turn as the bad, bad guy. Most everyone will appreciate the gorgeous sets, costumes, art direction and photography. Then, too, the script is first rate while the direction is most competent. Look for the Moderns on your next video run.