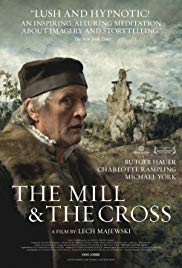 Storyline:
The film focuses on a dozen of the 500 characters depicted in Bruegel’s painting. The theme of Christ’s suffering is set against religious persecution in Flanders in 1564.
User Reviews: This gorgeous reconstruction of Bruegel’s painting is ultimately more impressive than inspiring. There is no character, no narrative, no emotion in this piece and there’s not that much analysis, either, despite the director’s claims. I just saw it at the SF Film Fest, and the likable and knowledgeable director gave a lengthy lecture a) on how long it took to find the fabric for the costumes and b) on the loss of our ability to read pictorial symbols. Sadly, the latter was not related to (or within) the film directly–that would have been interesting indeed!–and neither is the impressive (expensive) production design enough to make this work compelling.

If you are interested in symbology and art history, see Peter Greenaway’s, far superior Nightwatching, a film with a plot and lively characters as well as a fascinating view into the meanings (and the USE of meanings and symbols) of another famous Dutch painting, which, despite also suffering from some bombastic elements, still manages to engage the viewer in its own right as a movie.

Also Derek Jarman’s Caravaggio comes to mind as a film that uses tableaux to evoke the painter of the title. Despite–or perhaps due to–being somewhat opaque and strange, the Greenaway and Jarman films (and almost any of their work) are far more interesting than The Mill and the Cross, because they use the medium of film to SHOW and not TELL. This literal and slavish reproduction of the painting was impressive in its verisimilitude but ultimately pointless and superficial.

Storyline:A coming of age story involving young love and a mysterious music, coming from a crystal radio left as a memento by an absent father, that leads a young heroine deep into a hidden world.User Reviews: I disco...

Storyline:17-year-old Wan-Deuk comes from a poor family and his grades in school are equally poor. He is a rebellious and troubled student, but he never loses in fights. Wan-Deuk then meets teacher Dong-Joo. At first,...

Storyline:"FOUR ASSASSINS" aka "Far Away Eyes" is a tense drama about an ace assassin who reunites with three professional colleagues at a Hong Kong hotel room to resolve unfinished business. The film was heavily infl...

Storyline:What has happened to us? Despite the most advanced medical technology in the world, we are sicker than ever by nearly every measure. Cases of diabetes are exploding, especially amongst our younger population...

Storyline:An uptight NYC lawyer takes her two teenagers to her hippie mother's farmhouse upstate for a family vacation. What was meant to be a weekend getaway quickly turns into a summer adventure of romance, music, f...