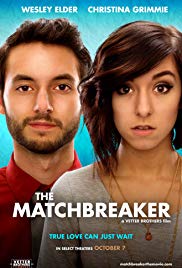 Storyline:
When an idealistic romantic gets fired from his day job, he is offered a “one-time gig” to break up a girl’s relationship for her disapproving parents. This “one-time” gig spreads through word-of-mouth and he ends up becoming a professional match-breaker. Business gets personal, however, when he’s hired to destroy the relationship of the girl he’s adored and pined for since grade school.
User Reviews: I usually don’t like romantic comedies, but I thought this one genuinely witty, like the ones Ron Howard used to do in the 1980s. Why not quite as cerebral as Whit Stillman’s best work, like his films, It is driven by the dialogue, and forgoes the usually expected slide into raunchiness typical of most comedies these days. I think this one should be given a shot, if you want something funny, sweet-natured and inoffensive. It is the only feature film done by the late Christina Grimmie, and is worth discovering.