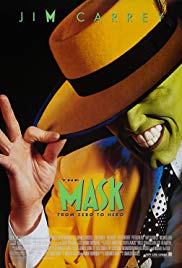 Storyline:
Stanley Ipkiss (Jim Carrey) is a bank clerk that is an incredibly nice man. Unfortunately, he is too nice for his own good and is a pushover when it comes to confrontations. After one of the worst days of his life, he finds a mask that depicts Loki, the Norse night god of mischief. Now, when he puts it on, he becomes his inner, self: a cartoon romantic wild man. However, a small time crime boss, Dorian Tyrel (Peter Greene), comes across this character dubbed “The Mask” by the media. After Ipkiss’s alter ego indirectly kills his friend in crime, Tyrel now wants this green-faced goon destroyed.
Written by
Ian Pugh <[email protected]>
User Reviews: Broad, inventive comedy stars Carrey as a repressed, down-on-his-luck banker whose once uneventful life is dramatically changed when he uncovers a mysterious ancient mask that brings out his innermost desires. After developing a close bond and gradual affection for a sexy songbird and prospective client (Diaz), he then tangles with her ruthless, lowlife gangster boyfriend (Greene). Lively, imaginative comedy with big laughs and nifty effects that almost make you feel like you’re watching a live-action cartoon. The violence borders on extreme, but Carrey is in peak form and provides more than enough classic moments to make up for it. A must for Carrey fans. ***