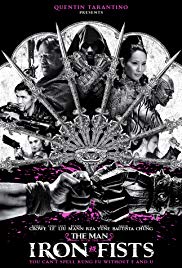 Storyline:
In Jungle Village, the leader of the Lion’s clan Gold Lion is summoned by the Governor and assigned to protect his gold that will be transported through the village. However he is betrayed and murdered by the greedy Silver Lion and Bronze Lion. Gold Lion’s favorite son Zen Yi, a.k.a. The X-Blade, seeks revenge and heads to Jungle Village, but he is defeated by Brass Body and rescued by the local Blacksmith Thaddeus. Meanwhile the Gemini Female and the Gemini Male protect the Governor’s gold, but they are vanquished by the army of Silver and Bronze Lion. The Blacksmith is abducted by the Lions and has his arms severed by Brass Body. However he is saved by the British Jack Knife, who is the emissary of the Emperor, and he manufactures iron arms for Thaddeus. Meanwhile the Governor sends the Jackal army to fight against the Lions and they hide the gold in the brothel of Madam Blossom. However, Madam Blossom and her girls form an army of black widows and together with Jack, Zen Yi and The…
Written by
Claudio Carvalho, Rio de Janeiro, Brazil
User Reviews: Okay, I’ve never reviewed movies but I’ll give it the old Jr. high try. This movie with it’s solid effects and even nicer fighting is still flawed. Maybe a review is too strong of a word here’s my bad/ good list. I’ve left a grade to give a better Idea of my disapproval.

The bad: 1. Focus the dang camera (C-), I’m not an expert but who the hell is focusing? Lucy Liu during a big speech has her helper in focus and she just off focus. If I spent $2000 on a wedding video I’d like the bride in focus, geez. The focus was out of control in a lot of places which was distracting.

2. Rza (D-) although I do really think this is a work of love and it shows, WTH was he thinking staring in this? If he’s too afraid of what his friends think of him if he stops doing his best droopy impression, don’t be the lead actor! I mean it’s 10-20 minutes, or however long he’s in this, of him looking emotionless. I mean grimace man or look sad when bad things happen! How hard is it!!

3. Flashbacks (F)There’s an origin flashback an boy is it misguided and uncomfortable! It’s just so underdeveloped, maybe the extended version would make sense of it but it really could have been shot better. I imagine this is to Southern Americans (not South America, the Hey Y’all kind etc), what bad American war movies are to Germans. If you’re gonna deface us do it with a little finesse.

4. Character motivations sucked(big ol’ F), I mean really sucked! I would have been happy to give this a 7 if the characters would make a little sense. Somethings could have been resolved easily I think by just a few lines of dialogue but nope it’s all thrown at you with no solid direction.

5. The "almost" makes it a crime(F), like where was everyone’s head? You have an almost great movie and no one could ask for help or give it??

6.Split screens (F), Why? Was action happening at the same time?, nope. Bad call, again in the right hands maybe. Here 4 minutes of film that wasn’t worth the editing time.

1. Costumes(B+) were cool, I liked them even the goofy ones, had no problems really. The wigs were really fun and funny.

2. The action(A-), was really great. Fun and funny with no real let downs you get into it and the end battle to me wasn’t disappointing except for rza’s acting but he was actually passable here(sort of).

3. Effects(A), yup solid, don’t care if it looks Kill Billish. Come on, I’ve actually watched anime since forever and that’s how blood sprays in most of those. Dumb to even bring kill bill into this(sort of).

4. Weapons(A+) lots of great gags and deaths. You can tell a lot of time went into conceiving these and the deaths.

5.The villain(A++), Silver Lion and Bronze Lion are great and eat up the screen, none of the heroes come close to these two guys charisma on screen! I mean why the heroes played it so straight without any wink wink moments is beyond me. Did they really think this was a serious movie?

Which comes to my overall review! 5/10 C+, basically there’s a lot going right here enough to be watchable, enjoyable even become a classic b movie. But it was so close to being more it’s a little sad.