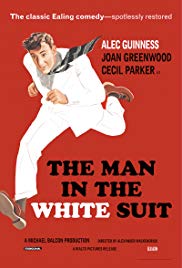 Storyline:
Sidney Stratton, a humble inventor, develops a fabric which never gets dirty or wears out. This would seem to be a boon for mankind, but the established garment manufacturers don’t see it that way; they try to suppress it.
Written by
John Oswalt <[email protected]>
User Reviews: This is one of my favorite movies of all time! It is a fantastic satire of industrial society. Sidney Stratton develops a revolutionary new fibre that will, in theory, never wear out and never get dirty. The owners of the textile mills wants to suppress this new invention because it will mean the end of their businesses. The workers want to suppress this new invention becuase it will mean the end of their jobs. However, the two groups do not trust each other. It is this distrust which drives the hysterical second half of the film.

Perhaps given the state of British industry prior the mid 1980’s, the author of the play on which the movie was based, was trying to warn British unions and management about the errors of their ways…..