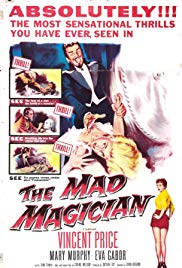 Storyline:
Don Gallico is a master at designing magical illusions which are sold by his employer, Mr. Ormond, to famous magicians such as Rinaldi. He is also a master of disguise and realistic mask design. When Don embarks upon his own career as Gallico the Great, showcasing his own masterful illusions, his dreams are shattered by Ormond and he turns to murder to vent his frustrations.
Written by
Jeff Hole <[email protected]>
User Reviews: The great Vincent Price has done many fantastic Horror films, some of which range among the greatest genre gems of all-time. Price’s greatest achievements were doubtlessly his films in the 60s, with films such as Roger Corman’s brilliant Poe-cycle (still the greatest Horror cycle of all-time), Michael Reeves’ "Witchfinder General" (1968) or Ubaldo Ragona’s "The Last Man on Earth" (1964) marking the ultimate highlights of this brilliant man’s career. The films that made the man famous and thereby made him the immortal Horror icon he is, however date back to the 50s, with "House of Wax" (1953) marking his rise to stardom. "The Mad Magician" of 1954 follows a plot that is very similar to that of its successful predecessor. This is not to say, however, that this film isn’t an original, delightfully macabre and absolutely wonderful gem itself. As the lines above may suggest, Vincent Price is my favorite actor, and, while I personally would not allow myself to miss anything the man has been in, none of my fellow fans of the man may miss this little gem.

Price stars as Don Galico (aka. Galico the Great), an underrated master magician and inventor of magic devices, whose boss, a sleazy businessman, stole his wife (Eva Gabor) from him. When the boss takes away one of Galico’s ingenious inventions and gives it to his rival, The Great Rinaldi (John Emery), Galico snaps, and a murderous spree of revenge begins…

Don’t we love Vincent Price when he’s out for revenge? Some of his most famous and greatest films such as "The Abominable Dr. Phibes" (1971) or "Theater of Blood" (1973) were about absurd and delightfully macabre revenge murders, and this earlier film in his Horror career is another proof that no one takes revenge as Vincent Price does. This film provides a wonderfully eccentric leading role for Price, who, as always, delivers a brilliant performance, and guarantees 70 minutes of outrageously entertaining and macabre fun for every Horror fan. Another must-see for my fellow Price fans.