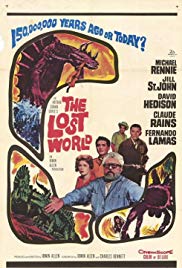 It’s an amusing old-fashioned and dated adventure from Arthur Conan Doyle(Sherlock Holmes’s author)novel that follows the wake of ¨Journey of the center of the earth¨ by Henry Levin previously filmed,in fact the finale part into the cave is similarly realized ,including a cliff-hungers scenes where the protagonists are dangling over a dangerous cliffs pursued by a cruel natives .An ambitious production values and quite entertaining considering its age.The Jurassik creatures are made by transparency as a giant spider and a lizards increased by optics effects. The story was impressive when first released but it looks pretty silly for standards nowadays. Dinosaurs delivers the goods with chills,grisly screams when the beasts appear,thus the climax film happens when the giant lizards running amok and are fighting among them.The motion picture is regularly directed by Irwin Allen, the catastrophe cinema’s creator(Adventure Poseidon,Towering inferno,Swarm).This story was formerly adapted in a silent movie(1925)and with dinosaurs made by the great Willis O’Brien(King Kong).Anothers remakes are filmed in 1993 by Timothy Bond with John Rhys Davies and of course the especial adaptation by Steven Spielberg :The lost world, Jurassik Park. The flick will like to the juvenile public and and adventures movie fans but best enjoyed in big screen