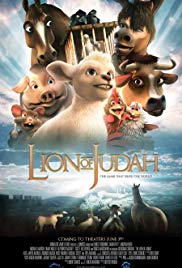 Storyline:
Follow the adventures of a bold lamb (Judah) and his stable friends as they try to avoid the sacrificial alter the week preceding the crucifixion of Christ. It is a heart-warming account of the Easter story as seen through the eyes of a lovable pig (Horace), a faint-hearted horse (Monty), a pedantic rat (Slink), a rambling rooster (Drake), a motherly cow (Esmay) and a downtrodden donkey (Jack). This magnificent period piece with its epic sets is a roller coaster ride of emotions. Enveloped in humor, this quest follows the animals from the stable in Bethlehem to the great temple in Jerusalem and onto the hillside of Calvary as these unlikely heroes try to save their friend. The journey weaves seamlessly through the biblical accounts of Palm Sunday, Jesus turning the tables in the temple, Peter’s denial and with a tense, heart-wrenching climax, depicts the crucifixion and resurrection with gentleness and breathtaking beauty. For Judah, the lamb with the heart of a lion, it is a story of…
Written by
Brent Dawes
User Reviews: For a lower budget animation this film really hits the mark. This is a great family picture. The characters are well thought out and the animation is pretty good. Now that it is in 3D its even better. I liked how they used the bible as a back drop and didn’t make it preachy. The music was amazing. A lot of original tracks, well composed and written. I liked how they used humor to tie together several touchy subjects.

The story really takes off as the crew heads out after their new friend. They meet all kinds of new and interesting characters along the way. The horse was my favorite character. He reminds me of the giraffe from Madagascar.