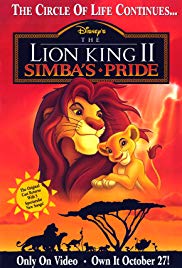 Storyline:
Simba and Nala have a daughter, Kiara. Timon and Pumbaa are assigned to be her babysitters, but she easily escapes their care and ventures into the forbidden lands. There she meets a lion cub named Kovu and they become friends. What she and her parents do not know is that Kovu is the son of Zira – a banished follower of the now-dead Scar. She plans to raise Kovu to overthrow Simba and become the king of the Pride Lands. This tests not only Kiara and Kovu’s relationship as they mature, but Simba’s relationship with his daughter.
Written by
Rori Stevens
User Reviews: A very powerful sequel to a very powerful and the best Disney movie. Kovu and Kiara teach us how powerful and strong the love is. Like TLK 1, TLK 2 bring us good songs, especially Love Will Find A Way and He Lives In You. The new characters are very good, the villain Zira is cruel, the poor Nuka dies trying to prove his braveness and Vitani…well she’s not a real villain like all the other outlanders. Unfortunately, they didn’t give a good number of lines to Zazu and Nala, especially Zazu – he have less lines than Nala. But every good movie sometimes commit little mistakes. Well, The Lion King 3 is confirmed (2002) and I can’t wait to watch this new movie, and I hope TLK 3 being so good like TLK 1 and TLK 2.