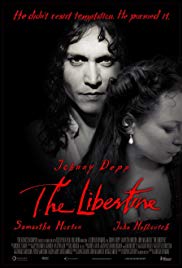 Storyline:
In 1660, with the return of Charles II to the English throne, theater, the visual arts, science and sexual promiscuity flourish. Thirteen years later, in the midst of political and economical problems, Charles II orders the return of his friend John Wilmot, aka the second Earl of Rochester, from exile back to London. John is a morally-corrupt drunkard and a debauched, cynical poet. When the King asks John to prepare a play for the French ambassador so as to please him, John meets the aspiring actress Elizabeth Barry in the playhouse and decides to make her into a great star. He falls in love with her and she becomes his mistress. During the presentation to the King and the French ambassador, John falls into disgrace with the court. When he is thirty-three years old and dying of syphilis and alcoholism, he converts to being a religious man.
Written by
Claudio Carvalho, Rio de Janeiro, Brazil
User Reviews: What images are conjured up by the title! Especially when we know in advance the lead is to be played by the handsome Johnny Depp. Perhaps a likable rake, a dissolute, even fashionable but very colourful icon of male supremacy – to be forgiven by female fans if they can watch from the safety of a cinema seat!

The reality is a disturbingly different film, dark and sombre, a 17th century candle-lit England, a portrait of the poet and debauchee John Wilmot, and one that ultimately bows out to a feminist heroine in the form of the great actress Elizabeth Barry (played by Samantha Morton).

In an opening prologue, Wilmot tells the audience that they will not like him. With the gusto characteristic of Depp, he throws himself into his melodramatic character in a way that is markedly different from his many half-serious, half-comic roles. As if to win his wager, he is out to repulse us – but not just with licentious excess: the tragedy of Wilmot is that he possesses genius but is unable to use it to furnish his own fulfilment. He is a tragic character, no Don Juan that follows a promiscuous lifestyle as a summum bonum, but a man of inner greatness for whom the outer world is so boring that he loses himself in drink and sexual excess and eventually alienates those around him. "I have to speak my mind," he says, "for it is always more interesting than what is going on around me."

As the 2nd Earl of Rochester, Wilmot is in and out of favour at the court of Charles II (John Malkovitch) and frequently upsets his lovely wife (Rosamund Pike) with his whoring and drinking. But his wife’s jealousy is eventually piqued not so much by the loose women or the ale-house, but by Wilmot’s love of the theatre – especially in the form of prostitute-destined-for-greatness, Elizabeth Barry. At a time before the emancipation of women, when the stage had recently been the sole province of men, Barry is determined to make it as an actress. She is hobbled by inexperience and a lowly position, but Wilmot takes her under his patronage and tutelage. Wary of the deal, Barry resists, saying she wants to rise by her own efforts – not so Wilmot can take the credit! He asks her what drives her, and her response, her passion for theatre, the desire to thrill and move an audience, is one that Wilmot identifies with, for he is tired of the lukewarm pastiches that trivialise even great writing.

Unfortunately for Wilmot, his own greatness is on the ebb. It was said of him that he was, "A man whom the muses were fond to inspire, but ashamed to avow." His taunting of the king and a scurrilous lampoon of Charles II in front of the French ambassador help to seal his fate.

Samantha Morton continues to show her acting talents with a substantial (if not substantial enough) part and Malkovitch is an adequate counterbalance to the very considerable stage presence of Depp. The screenplay (based on an earlier play starring Malkovitch) sparkles with wit and, even if the direction is a little uneven or turgid at times, it is an admirable and important debut from Laurence Dunmore. The desaturated colours and muddy, rain-sodden English countryside create an air of foreboding entirely appropriate for a work that is more serious than its title suggests.

Intellectually, we are treated to the drollness and intelligence of Wilmot but realise that he is a ‘locked-in’ and isolated character, a loner and barely appreciated trailblazer (in some respects like the great Marlon Brando to whose memory, among others, the film is dedicated). We also see the folly and weakness of his philosophy.

Yet it was the honour of the lowly Elizabeth Barry that ultimately inspired him and, somehow, remained ever out of reach.

Storyline:Fictionalized account based on the actions of serial killer Dennis Nilsen.User Reviews: This is what they sometimes call a 'docu-drama,' which never really cuts it for me, it's either a documentary or a dram...

Storyline:Kerala-based George Nair is an efficiency expert who travels to Pune to provide a report on downsizing. He is met with the firm's Vice-President, Malathy Chandran, and must come up with a plan to let go a nu...

Storyline:15-year-old Mike takes a job at the local swimming baths, where he becomes obsessed with an attractive young woman, Susan, who works there as an attendant. Although Susan has a fiancé, Mike does his best to ...

Storyline:The President of an African country decrees that the Arms budget will be diverted in to the "Water For All", project. The journalist, Michael Power, discovers a Coup set by the arms dealers.User Reviews: Whe...

Storyline:In a fantasy world of opposing kingdoms, a 15-year-old girl named Helena who works at the family circus with her father and mother, who wishes--quite ironically--that she could run away from the circus and j...