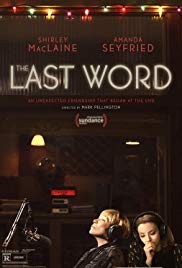 Storyline:
Harriet (Shirley MacLaine) is a successful, retired businesswoman who wants to control everything around her until the bitter end. To make sure her life story is told her way, she pays off her local newspaper to have her obituary written in advance under her watchful eye. But Anne (Amanda Seyfried), the young journalist assigned to the task, refuses to follow the script and instead insists on finding out the true facts about Harriett’s life, resulting in a life-altering friendship.
Written by
Bleecker Street
User Reviews: Wealthy woman, a former business titan living a very precise and orderly–and lonely–existence in her nearly-empty manor, wants the final say on her future obituary. Having kept her local paper alive for many years with her advertising dollars, she self-assigns the obituary reporter with the task of putting an optimistic spin on her life. What begins as a very thin character study of a straight-talking yet annoying character slowly blossoms into the much more rewarding story of a pushy old lady who manages to transform her bitter existence with friendship. Granted, friendship doesn’t come easily to this control-freak, but what transpires on her journey to personal redemption is surprising and rewarding. The sassy dialogue in Stuart Ross Fink’s screenplay doesn’t ring true (and some of the actors cast in the smaller roles haven’t a hope in hell of making it sound natural), but leads Shirley MacLaine and Amanda Seyfried develop a pleasing scratchy-and-smooth rapport (they also co-executive produced). MacLaine has yet another turn at playing a stubborn, impossible woman (she’s making it a habit). While her Harriet here isn’t necessarily a plausible creation, she’s certainly a colorful bouquet of quirks, tied up with a cackle and a smart retort. ** from ****