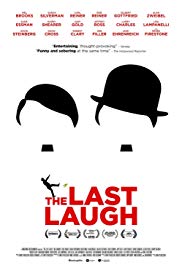 Storyline:
Feature documentary about humor and the Holocaust, examining whether it is ever acceptable to use humor in connection with a tragedy of that scale, and the implications for other seemingly off-limits topics in a society that prizes free speech.
Written by
Robert Edwards
User Reviews: The Last Laugh (2016)

This documentary discusses comedy and whether or not the Holocaust should be joked about. Various Jewish comics including Sarah Silverman, Rob Reiner, Mel Brooks, Carl Reiner, Judy Gold, Gilbert Gottfried, Larry Charles and Susie Essman are interviewed about the topic as well as other controversial themes.

THE LAST LAUGH is certainly a very entertaining documentary that tries to take a look at a comic job and ask where the line should be drawn and if it should ever be crossed. The documentary takes a look at a lot of examples including some controversial comments made by the likes of Joan Rivers, Silverman and even a look at Hollywood and movies like THE GREAT DICTATOR and THE PRODUCERS.

For the most part I found this documentary to be entertaining as it deals with people who are offended at certain subject matter. This includes various races as well as people who might be offended by tragedies like 9/11 and of course the Holocaust. It’s interesting hearing people talk about where their own personal line is and especially Mel Brooks who isn’t too fond of the Oscar-winner LIFE IS BEAUTIFUL. It should be noted, Jerry Lewis’ THE DAY THE CLOWN CRIED is also discussed.

I must say that I thought there was some hypocrisy in a few of the comments but at the same time I guess this is to be expected. THE LAST LAUGH does a nice job at examining the controversy and looking at it from different points of view.

Storyline:Aspiring teenage astronauts reveal that a journey to Mars is closer than you think.User Reviews: This film lays out the history of plans for human exploration of mars very well, especially Warner von Braun's...

Storyline:Midvale College is in fear of losing its college football team. The players have grades lower than the norm. Judge Holmesby, the team's biggest fan, is at a loss for what to do. Enter Merlin Jones, a bright ...

Storyline:Released from jail, John Wesley Hardin leaves an account of his life with the local newspaper. It tells of his overly religious father, his resulting life of cards and guns, and his love for his step-sister ...

Storyline:This documentary features rare footage filmed by Christopher Wallace's best friend, Damion "D-Roc" Butler, and interviews with his closest friends and family, revealing a side of Biggie Smalls that the world...

Storyline:Tom and Jerry and other racer's try to win the key to the prize. They firstly go to Mexico and find out the ratings are too high so they extended it to the Amazon Jungle. Tom eliminates Soccer mom by making ...

Storyline:Engineers, architects and historians are assembled to examine why the Titanic sank, using new technology that has come to light since James Cameron's film Titanic (1997).User Reviews: I won't get into the po...