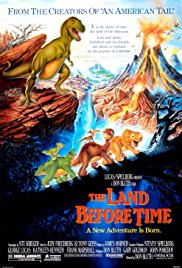 Storyline:
An orphaned brontosaurus named Littlefoot sets off in search of the legendary Great Valley. A land of lush vegetation where the dinosaurs can thrive and live in peace. Along the way he meets four other young dinosaurs, each one a different species, and they encounter several obstacles as they learn to work together in order to survive.
Written by
Scott Lane <[email protected]>
User Reviews: You heard me! Not even through the eight sequels, could they surpass the enjoyment of this one! The story is just classic. It’s Don Bluth’s finest work, I must say. It’s ironically the only movie in the LBT series that was made for theaters! Pretty cool, huh?

I couldn’t believe when I read how this movie was only like 70 minutes long. It seems like a long time, since it’s so good. You’ve got cool dinosaur characters, going alone on a journey to the Great Valley. I think it’s entertaining the way they have different names for the dinosaur species. Like "Sharp-tooth" for a T. Rex, or "Three-Horns" for a Stegosauraus or "Long-Neck" for Brontosauraus. My favorite character is Peetree, who is pretty cute. Too bad about Judith Barsi dying. That actually makes it interesting because now I know all the times in the sequels she was voiced by a different person than this time. I hope I’ll see this movie more often. It seems like forever since I’ve seen it.

But then came the sequels. Part 4 was very nice(the best sequel yet), and Parts 2 and 3 were good, but after 4, let’s face it. The movies are repetive and dull, just doing the same things its proceeders did. Why haven’t they just made a TV show instead of all these sequels? Now, THAT would be something I’d like to see. This classic gets a 9/10