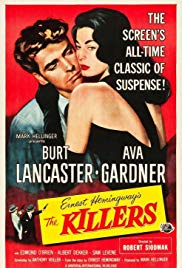 Storyline:
Two professional killers invade a small town and kill a gas station attendant, “the Swede,” who’s expecting them. Insurance investigator Reardon pursues the case against the orders of his boss, who considers it trivial. Weaving together threads of the Swede’s life, Reardon uncovers a complex tale of treachery and crime, all linked with gorgeous, mysterious Kitty Collins.
Written by
Rod Crawford <[email protected]>
User Reviews: Some intrepid critics have categorised ‘Citizen Kane (1941)’ as an early example of film noir, owing largely to its influential cinematography and flashback narrative structure. As though consciously in support of this assertion, Robert Siodmak’s ‘The Killers (1946)’ expanded from a 1927 short story by Ernest Hermingway plays out precisely like a noirish retelling of Welles’ film. After enigmatic ex-boxer Swede Andersen (Burt Lancaster) is gunned down by hired assassins in a small American town, insurance investigator Jim Reardon (Edmond O’Brien) decides to piece together the man’s past using fragmented testimony from those who once knew him. In doing so, he hopes to uncover the meaning behind the dead man’s final words, "I did something wrong once." The life that Reardon discovers is one tinged with tragedy, regret and betrayal, revealing details of an audacious factory heist, a treacherous dame, and a double-cross to end all double-crosses. An archetypal noir, ‘The Killers’ caps an excellent year for Siodmak, who also released the Freudian psycho-thriller ‘The Dark Mirror (1946).’

‘The Killers’ opens with a thrilling prologue that sees two hired thugs (William Conrad and B-noir stalwart Charles McGraw) harass the patrons at a small-town diner on their way to assassinate Swede Andersen. The characters’ quickfire exchange of dialogue resembles something that Tarantino or the Coen brothers would have written decades later, only better, because screenwriter Anthony Veiller (with Richard Brooks and John Huston) reproduces the conversation from Hemingway’s short story almost verbatim. After Andersen is unresistingly gunned down in his bed, the screenplay then expands upon the foundations laid down by the source material, using flashbacks to fill in the empty spaces at which Hemingway had only hinted. Veiller, whose work before WWII was dominated by romantic dramas, comedies and light mysteries like ‘The Ex-Mrs. Bradford (1936),’ appears to have been hardened by his work on Frank Capra’s "Why We Fight" propaganda series, and the dark, cynical post-War tone he brings to Swede’s tragic story is an ideal representation of the noir spirit.

Burt Lancaster shows promise in his screen debut, though the film’s narrative structure does keep the audience distant from his character, an issue that Welles somehow avoided in ‘Citizen Kane.’ As the resident femme fatale, Ava Gardner never quite inspires the collective hatred garnered by Barbara Stanwyck in ‘Double Indemnity (1944)’ or Jane Greer in ‘Out of the Past (1947),’ but perhaps that speaks to her charms that, despite her betrayal, we’re still unwilling to treat her with due contempt. Good-guy Edmond O’Brien cheerfully and voyeuristically experiences the wretched life of a gangster through the intermediary flashback device he ends the film with a cocky grin, like an audience-member emerging from a screening of the latest gangster thriller. Throughout this review, I’ve been making allusions to ‘Citizen Kane,’ but there’s a very important difference between the two main characters: Charles Foster Kane had all the money in the world and got nothing out of it. Swede Andersen wasn’t even that lucky; he didn’t even get the money.