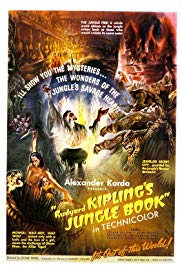 Storyline:
Teenaged Mowgli, who was raised by wolves, appears in a village in India and is adopted by Messua. Mowgli learns human language and some human ways quickly, though keeping jungle ideas. Influential Merchant Buldeo is bigoted against ‘beasts’ including Mowgli; not so Buldeo’s pretty daughter, whom Mowgli takes on a jungle tour where they find a treasure, setting the evil of human greed in motion.
Written by
Rod Crawford <[email protected]>
User Reviews: A young child wanders off into the woods and is lost. With the dangerous, bloodthirsty tiger Shere Khan lurking about, the little boy is adopted by wolves and raised in the jungle. Later embroiled in a jungle feud with Shere Khan, the partly grown boy is driven out of the jungle back into the world of man where he seeks a tooth (a knife) with which he can once and for all strike down his arch nemesis. However the world of man offers many unseen dangers and man isn’t inclined to follow those laws of the jungle to which the animals abide.

Personally I feel this is the best adaptation of the "Jungle Book" Rudyard Kipling story put to film. I prefer this over the Disney versions because it never fully loses sight of its overall message, doesn’t fail to show the key differences between man and beast, and isn’t bogged down by comedy or musical distraction. It’s also fun and adventurous, boasts real animals in the familiar roles who give surprisingly believable performances. Lead Sabu as Mowgli is a natural to the role while character actor Joseph Calleia does quite well as lead villain Buldeo. Calleia made quite a career out of playing such roles. By far the silliest moments here have got to be the result of the talking snakes with the human voices. They are the only critters in the film to talk in such a fashion. While the information they relay is vital to the plot of the movie, I’m not sure we really needed to actually hear it spoken aloud. Also the romantic subplot doesn’t quite fit in the story either and that it’s introduced and never resolved is somewhat disappointing. Still at the end of the day, you want jungle adventure excitement done right, you won’t go wrong with 1942’s Jungle Book.