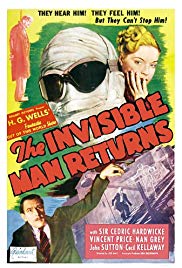 Storyline:
Framed for the murder of his brother, Geoffrey Radcliffe is scheduled to hang. After a visit from his friend Dr. Frank Griffin, he vanishes mysteriously from prison. Police inspector Sampson realizes that Griffin is the brother of the original Invisible Man and has given Geoffrey the formula to aid his escape. Can Geoffrey elude the police dragnet and track down the real murderer? More importantly, can Griffin discover an antidote before the invisibility formula drives Geoffrey insane?
Written by
P. Silvestro
User Reviews: The Invisible Man (1933) stands alone as being the greatest adaptation of H.G. Wells’ story because it follows the novel’s storyline and captures the atmosphere of the original work. The film also has the ability to polish some of the scenes with humor. Like other Universal horror classics, it deserved and got sequels, and though the Invisible Man Returns was a lesser effort, it was far superior than any other attempt to remake the classic (the recently made Hollow Man was down right horrible and, yes, hollow.) The Invisible Man Returns begins by introducing us to the brother of the first film’s invisible one who escapes prison using the formula his brother developed. This is a far-fetched and awkward way to create a sequel, but once it’s out of the way the rest of the film again captures the formula, fun and atmosphere of the original. Followed with mixed results by The Invisible Woman (comedy), The Invisible Agent, The Invisible Man’s Revenge and Abbott and Costello Meet Frankenstein (which features the Invisible One).