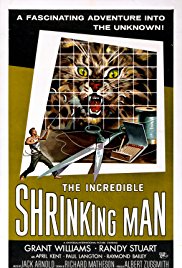 Storyline:
Scott Carey and his wife Louise are sunning themselves on their cabin cruiser, the small craft adrift on a calm sea. While his wife is below deck, a low mist passes over him. Scott, lying in the sun, is sprinkled with glittery particles that quickly evaporate. Later he is accidentally sprayed with an insecticide while driving and, in the next few days, he finds that he has begun to shrink. First just a few inches, so that his clothes no longer fit, then a little more. Soon he is only three feet tall, and a national curiosity. At six inches tall he can only live in a doll’s house and even that becomes impossible when his cat breaks in. Scott flees to the cellar, his wife thinks he has been eaten by the cat and the door to the cellar is closed, trapping him in the littered room where, menaced by a giant spider, he struggles to survive.
Written by
alfiehitchie
User Reviews: The best sci/fi movie of the 50s. It’s different from most others in that it has a theme; it’s not just a series of scary and threatening events. The smaller Scott Carey gets, the braver and more resourceful he becomes. As he shrinks, he reaches a kind of spiritual enlightenment.

The only sour note (besides the special effects, which may seem primitive by today’s digital standards, but which I, as an 8-year-old in 1957, seeing this for the first time, thought were astounding) is the scene with the Little People. The metaphor of "you are as big as you feel" is laid on pretty thick, and that particular set of special effects (especially that big coffee cup Clarice drinks out of) didn’t fool me, even as an 8-year-old. Incidentally, up until recently, TV showings of this movie usually cut that scene out, although the names of the actors who played the Little People were left in the end of movie credits.

However, the point is well taken, and Scott realizes that as his physical size decreases, his mental and spiritual powers are increasing. The final scenes are a testament to Transcendentalism. For example, Scott says in the narration that he no longer hates the spider who has been threatening him during his imprisonment in the cellar. He understands that it has as much right to survive as he has. In Transcendental terms, he is saying that existence is neither good nor evil, it simply "is." (Do people in California really have tarantulas in their cellars?) The wonderful last scene, where Scott (the absolutely gorgeous Grant Williams), bruised, battered, exhausted, looks up at the heavens and is no longer afraid, is one of the most empowering scenes in all cinema. This man has been so beaten down by fate that he is literally disappearing, and yet he affirms existence, and resolutely continues to move forward to whatever that next plane of existence may be. This ending is a far cry from the usual finales of sci/fi films of the 50s, where destruction is generally the resolution of the crisis. Here, there is no destruction, only transcendence. I never get tired of this film.