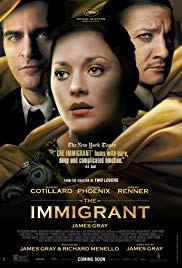 Storyline:
1921. In search of a new start and the American dream, Ewa Cybulska and her sister Magda sail to New York from their native Poland. When they reach Ellis Island, doctors discover that Magda is ill, and the two women are separated. Ewa is released onto the mean streets of Manhattan while her sister is quarantined. Alone, with nowhere to turn and desperate to reunite with Magda, she quickly falls prey to Bruno, a charming but wicked man who takes her in and forces her into prostitution. And then one day, Ewa encounters Bruno’s cousin, the debonair magician Orlando. He sweeps Ewa off her feet and quickly becomes her only chance to escape the nightmare in which she finds herself.
Written by
Wild Bunch
User Reviews: James Gray’s beautifully shot 1920s New York period drama about the American dream gone to seed for a Polish woman, never stumbles into soap opera melodrama and the film is actually restrained considering the heaps of drama thrown at this woman. Marion Cotillard gives a wonderful performance as the immigrant who finds herself exploited in prostitution and the script wisely never makes her blind to the fact that things will be quickly heading south for her – she’s a strong, smart woman who’s hostage to a miserable situation. Jeremy Renner makes the most of his small but pivotal role and is the only character who seems to be having a good enough time and he injects some munch needed energy into this story. It’s Phoenix, whose shyster character is the most complicated, that never comes across convincing. And while Phoenix is never for a moment boring to watch and for the most part doesn’t over act, his acting decisions seem too thought out and theatrical. While Cotillard, Renner and the rest of the cast give performances that feel natural and embody these characters, it always feels like Phoenix is acting. Though locations are minimal and the few exterior shots are usually in a tunnel, the period detail is convincing and it’s a nice too see a period film actually shot on film instead of digital. The Immigrant is a good showcase for Cotillard’s talents and despite its flaws, definitely worth a watch.