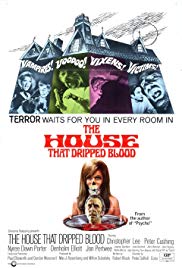 Storyline:
A Scotland Yard investigator looks into four mysterious cases involving an unoccupied house and its tragic previous tenants: 1) A hack novelist encounters a strangler who’s the villain of his books, leading his wife to question his sanity, 2) Two men are obsessed with a wax figure of a woman from their past, 3) A little girl with a stern, widowed father displays an interest in witchcraft, and 4) An arrogant horror film actor purchases a black cloak which gives him a vampire’s powers.
Written by
Wes Clark <[email protected]>
User Reviews: When the Scotland Yard Detective Inspector Holloway (John Bennett) comes to a precinct to assume the investigation of the disappearance of the horror film actor Paul Henderson (Jon Pertwee), the local officer tells stories about dwellers of the old house rented by Henderson.
Segment 1 "Method for Murder" – The horror story writer Charles Hillyer (Denholm Elliott) moves to the house with his wife to write a novel. He creates a strangler serial-killer and soon he sees the man everywhere in the house. Is Charles becoming insane?
Segment 2 "Waxworks" – the retired and lonely bachelor Philip Grayson (Peter Cushing) moves to the house and visits the Wax Museum of Horror in the nearby town. He finds a wax statue of a woman identical to the one he loved, and the owner informs that she is his wife that died some time ago. When his friend and former love rival visits him, he goes to the wax museum and is not capable to leave town impressed with the woman. Philiptries to help his friend with tragic consequences.
Segment 3 "Sweets to the Sweet" – the wealthy John Reid (Christopher Lee) hires a teacher to give private education to his lonely daughter that has no friends and no toys. When candles disappear from the store, John has a heart pain during the night and discloses the secret of his wife and daughter to her skeptical teacher.
Segment 4 "The Cloak" – the arrogant Paul Henderson seeks an authentic vampire cloak to use in the film he is working and he finds a weird fantasy shop and soon he finds that he becomes a real vampire when he wears the cloak.
The skeptical Holloway decides to go to the house during the night and leans the fate of Henderson in a tragic way

"The House That Dripped Blood" is an anthology from horror studio Amicus with the lead story and four segments, all of them engaging and entertaining. Fans of horror films from Amicus and Hammer will certainly not be disappointed with the segments and the conclusion. My vote is eight.

Storyline:Simply put, 6 eclectic and diverse animation styles present some surprisingly adult little vignettes that, in theory, add up to a film. An apparent festival favorite.User Reviews: