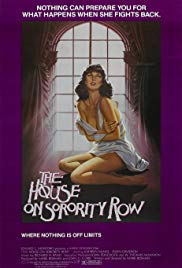 Storyline:
A group of girls staying at a sorority house clash with the house’s owner, who wants them out. They decide to play a prank on her, but it goes awry and she winds up dead. Panicking, the girls try to hide the body, but someone (or something) witnessed the crime and begins to stalk them.
Written by
Anonymous
User Reviews: "The House On Sorority Row" is above your average slasher flick. It’s up there with "Halloween’s" followers like "Friday the 13th," "Prom Night," "My Bloody Valentine" and "Sleepaway Camp." Unlike most slice-and-dice movies, "The House On Sorority Row" actually has a plot, some good acting from the cast, a mysterious killer, and it’s not that bloody.

The plot revolves around the 7 girls of Theta-Pi sorority: Katey, Vicki, Liz, Diane, Stevie, Jeanie and Morgan. At the end of their college days, the Thetas decide to have one last fling before they go. However, their evil house mother, Mrs. Slater, is willing to do anything to stop the festivities. But that doesn’t mean that the Thetas don’t have a plan of their own. They decide to pull a very cruel prank on Mrs. Slater, which is guaranteed to work perfectly. But the prank goes too far, and it results in Mrs. Slater’s death. Afraid that the police will suspect them, the girls hide Mrs. Slater’s body in the pool. They will have their party and will get rid of the corpse in the morning. Unfortunately, somebody knows what they did, and that person decides that they’re going to make the girls of Theta-Pi pay for what they did.

The cast is well-chosen with Kate MacNeil as Katey, Eileen Davidson as Vicki, and the rest of the sorority girls are not bad.

"The House On Sorority Row" does have its flaws, but they are only minor. One of the girls has almost zero lines of dialogue, the film drags just a little bit, and it’s so obvious that Lois Kelso Hunt’s(who played Mrs. Slater) voice is entirely dubbed, since director Mark Rosman says that her voice was not scary enough for the role. But I did not pay attention to these issues, and I really enjoyed the movie.

The result: Sometimes, what a slasher fan needs is a little bit more than just a hack-em-up film. Some genre fanatics might look for a slasher-thriller. "The House On Sorority Row" is that movie. It offers suspense, a little bit of gore, some of the inevitable female nudity, good characters and a creepy villain. Not to be missed.