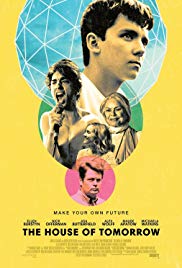 Storyline:
Sebastian Prendergast lives in a dated tourist spot called the House of Tomorrow with his grandmother Josephine. Sebastian longs to leave his isolated existence which quickly changes when he meets Jared Whitcomb, a young up and coming punk rocker with a heart condition, and his sister Meredith. Inspired to rebel, Sebastian decides to pick up a guitar and join Jared in becoming a punk rock group.
User Reviews: What really shines in the film are the actors. Asa Butterfield and Alex Wolff are good, I dare say Nick Offerman is great. Not so much Ellen Burstyn, who had a cardboard role and a similar approach to it. The story is also interesting, although polluted with some tough to swallow cliches like "the teenage kid that never had soda and speaks like a dictionary" or "the nasty but good at heart kids". But once you get over those, the film is very pleasant. There are some scenes that are just wonderful.

Bottom line: coming of age story with a nice happy ending, an exploration of the teenage angst from the eyes of a naive and sheltered child raised in the spirit of futurism by a nutty grandmother. I recommend it.