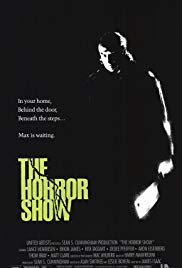 Storyline:
Detective Lucas McCarthy finally apprehends “Meat Cleaver Max” and watches the electric chair execution from the audience. But killing Max Jenke only elevated him to another level of reality. Now Lucas’ family is under attack, his sanity in question, and his house haunted. Aided by a disreputable college professor, can Lucas reclaim his mind, house, and family? Features Lance Henriksen as Lucas McCarthy and Brion James as Max Jenke. One of the few movies featuring these actors as main characters.
Written by
Matrix <[email protected]>
User Reviews: I just learned (reading these IMDb reviews) that this is a supposed "House" iteration… I never would have guessed it- In fact, I’ve been a fan of this film for years, and never even considered it had anything to do with the "House" films (I’ve only seen the US release, which is NOT titled ‘House III’, obviously)- Lance Henrickson is his usual, intense, (in my opinion, Excellent) self, we see a young Dedee Pfiefer being, well, herself- and Brion James at his most foreboding since ‘Leon’ in Bladerunner… (not going to talk about Tango & Cash here…). As for the ‘Shocker’ similarities- check the dates… this one came out first- Because of this, (all deference to Mitch Pileggi, of whom I’m also a big fan) I’ve always felt that Shocker was the rip-off, of a MUCH more intense and, pardon the pun, Shocking film… (I was really surprised to see a "Smithee" attached to this film anywhere- my guess is… politics. But hey, that’s Hollyweird for ya). Yup, there’s gore, and oh yeah- swearing galore, but this movie is one I look forward to dusting off every October, as my "must watch list" approaches "psycho-killer week"… (quick plug here- if you haven’t decided whether or not to watch "Behind the Mask- The Rise of Leslie Vernon"- do yourself a Big favor, and check it out- it defies classification; funny, sharp, and actually Scary!).

If you’re looking for a horror movie that may make you wince (talking about Horror Show)- this one could be a winner for you- It certainly is for me.

Quick P.S.- Fans of Lance- If Vampire movies are more your speed, a MUST-See is "Near Dark"- Honestly one of the Coolest Fang-pics I’ve ever seen… Happy Haunting!