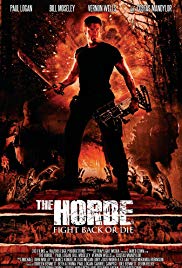 Storyline:
The film follows John Crenshaw as he accompanies his girlfriend and her students on a weekend nature-photography expedition deep into the woods. What should be an educational and fun-filled weekend turns into horror as the group is besieged by an unspeakable evil – a horde of hideously disfigured, mutated humans with an insatiable taste for blood. As things go from bad to worse, Crenshaw becomes their only hope if they are going to get out alive.
Written by
313 Films
User Reviews: The Horde is to be applauded. Applaud The Horde.

"Why is it to be applauded?!" I hear you cry, well, there are many reasons.

Mainly because 1) It is an independent film that puts practical effects above terrible CGI 2) It mixes the kind of fun, straight to video martial arts I miss from the 80s and 90s with the sort of surreal, gory and mad horror I miss from the 70s and 80s 3) It is enjoyable and doesn’t take itself seriously without trying hard to be ironically so bad it’s good. 4) All the "cameo" or supporting players do an amazing job chewing the scenery – especially Vernon Wells in his sequence. 5) It’s lit and set designed really well.

The Horde feels like a film made by genre film fans for genre film fans. It skirts around the edges of being knowing, having cinematic frames of reference and certainly aiming to attract a midnight crowd but not only is it apparent, from the fight set pieces to the practical special effects, that a huge amount of dedicated work and craftsmanship has been put into making it but it’s also having immense fun just being an entertaining, adult, tearaway, violent, gory romp.

When I first put the film on I had no idea what I was in for. I assumed it was going to be just another zombie film, probably because of the french film of the same name. In fact, the name of the movie could’ve been given a little rethink, not just because it is a familiar name of other films and a computer game but also because it doesn’t sit completely right, for me, with what happens in the movie (but that’s a small nitpick).

Initially the film was reminiscent of some of the later entries in the Friday 13th franchise. The early slasher kill sequence, the set up of the cliché youthful characters, the purposefully weak innuendoes about sex, the improbable excuse to go into the woods in the middle of nowhere, the forced dialogue etc. Have to admit, it had me a little cautious that this was going to be a difficult movie to get through. Remember, I had no idea what the film was about or what was about to happen. I also need to indicate that if you’re an 80s horror fan, you’ll be no stranger to this type of dialogue.

It wasn’t till we got to the Don Wilson cameo, followed by the barroom brawl, and meatheads were taking flying kicks to the face that I sat up and my mind changed.

I am a huge 80s and 90s action fan and also a huge 80s horror fan and so what happened next appealed to me greatly, especially once the night-time roller-coaster of carnage and mayhem got underway.

The main cast of the kids and the teacher are a mixture of newcomers and up and comers. They all handle themselves fine. Two of them aren’t given much to do but make out and talk about making out, but that’s sort of to be expected, two of them have a little more to do as they seem on the brink of a relationship but are also a little more down to earth, nervous and normal teens.

Sydney Sweeney, whose part gets considerably more challenging as the film goes on, does well with the softer, sweeter dialogue in the earlier part of the film and her small scene with Tiffany Brouwer is a stand out before everything gets dark and nasty.

I am not sure if being affectively annoying and punchable is something to be praised but Thomas Ochoa, with the equally punchable character name of Riley St. Claire, is highly successful as the spoilt, rich daddy’s boy who doesn’t have a kind word to say about anyone and who can’t stop gassing on about all his money. It’s quite timely really as he is like a skinny, young, dark haired, effeminate Donald Trump.

Rounding out the main cast is our hero, the aforementioned, Paul Logan. He wrote the film, produced it, stars in it and did the fight choreography. That’s very, very impressive and I doubt the man had much sleep. Doing multiple jobs like that on a lower budget movie means long days, short nights and not much sitting down. His fighting style is watchable and accomplished. I felt it could’ve been served better with a different shooting style and slightly better editing but it definitely got the point across and made for some entertaining rumbles.

For those in the know, the supporting cast is a who’s who of action and horror stalwarts that are having a wonderful time chewing the scenery and tearing up the screen.

The last thing to be said on The Horde, which I hinted at earlier, is just how refreshing it was to see an indie genre movie of this kind use real make-up effects, proper design, lighting and set dressing, great stunts, martial arts and so on. A lot of modern films lack that authenticity and it always makes a movie, in my view, when I can see strange, wonderful and creative ideas, designs and effects on the screen.

The movie has just about a little bit of everything. It is violent, gruesome, gory, disgusting, sexy, fun, enjoyable, weird, surreal and action packed. A B-Movie in every sense of the word. With a more dynamic director and a snappier, tighter edit this film could really be a new cult favourite. As it stands it is a valiant effort, with some highly enjoyable ideas and moments, practical effects and stunts galore. I’d watch a sequel.