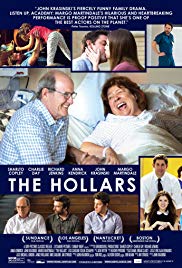 Storyline:
Aspiring NYC artist John Hollar returns to his middle America hometown on the eve of his mother’s brain surgery. Joined by his girlfriend, eight months pregnant with their first child, John is forced to navigate the crazy world he left behind as his dysfunctional family, high school pals, and over-eager ex flood back into his life ahead of his mother’s operation.
User Reviews: "The Hollars" (2016 release; 90 min.) brings the story of the Hollar family. As the movie opens, Sally (the matriarch so to speak) is found laying on the bathroom floor, and we soon learn that she has a potentially life-threatening brain tumor ("the size of a softball"). Meanwhile, we also get to know her husband Don, whose heating and plumbing business is *this* short of bankruptcy, oldest son Ron, who is so down on his luck that he is living in the basement of his parents’ house, and younger son John, a wanna-be graphic novelist bored out of his mind at his current customer service job, and his highly pregnant girlfriend Becca. At this point we’re 10 min. into the movie but to tell you more would spoil your viewing experience, you’ll just have to see for yourself how it all plays out.

Couple of comments: this is the second film directed by actor John Krazinski (who also plays the role of the younger son John). In this movie, he examines a dysfunctional (and that is a kind reference) family, in which pretty much everyone is unhappy, or unlucky, or both, as to the state of affairs in their respective lives. The movie is billed as a ‘comedy-drama’ and I’d say that is pretty accurate, with the funniest bits coming up in the first half of the movie (with the best of those featured prominently in the movie’s trailer, which I had seen beforehand). The second part of the movie is far more introspective, and for me the better part of the movie. When John asks his mom how she managed to get through 38 years of marriage, Sally responds "Don’t waste time with the bad, live with the good. I’ve had a good marriage for 38 years." The movie is helped tremendously by some wonderful acting performances, starting first and foremost with Margo Martindale as Sally, bur Richard Jenkins as her husband Don is equally great. Anna Kendrick as John’s highly pregnant girlfriend has a surprisingly large role 9and she is super-charming in it), whereas Mary Elizabeth Winstead as John’s ex-girlfriend has maybe 5 min. of screen time in total. Check out also Josh Groban (yes, the singer) in a charming role as Reverend Dan. Last but not least, there is a terrific soundtrack from singer-songwriter Josh Ritter. Bottom line: the movie has received a mixed reaction from critics and the public at large. Perhaps because of that, my expectations were low, going into this. Instead, I found myself fully charmed by and invested in these characters, and I was sorry to let go of them when the movie was over.

"The Hollars" premiered at the Sundance Film Festival earlier this year, and it finally made its way to my local art-house theater here in Cincinnati this past weekend. The Monday evening screening where I saw this at was attended okay (given it was a Monday). No, this film doesn’t cover any new ground as such, but if you like small-scale indie movies with a big heart, you;ll want to give this one a chance, be it in the theater, on Amazon Instant Video or eventually on DVD/Blu-ray. "The Hollars" is HIGHLY RECOMMENDED!

Storyline:The documentary that answers the question: is having month-long double paid vacations, no fear of homelessness, and universal health care the nightmare we've been warned about? The answer may surprise you.Us...