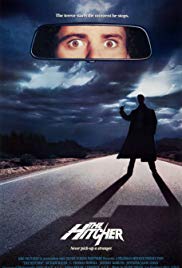 Storyline:
A young man transporting a car to another state is stalked along the road by a cunning and relentless serial killer who eventually frames the driver for a string of murders. Chased by police and shadowed by the killer, the driver’s only help comes from a truck stop waitress.
Written by
Keith Loh <[email protected]>
User Reviews: Yes, this movie would be remade years later with Sean Bean cast as the hitchhiker that likes to play some rather brutal games and one has to wonder why. Rutger Hauer was perfectly cast here as the psycho and his performance could not have been topped. Maybe they felt the need for a female lead rather than the male one because you know how females never get the chance to be the main character who survives in a horror movie (heavy sarcasm here). This is basically a story of a young man driving in the middle of nowhere who looks to have been very bored and in the need of some company. He finds some in the form of a hitchhiker and suffice to say he should have listened to all the warnings he got of hitchhikers, but on the plus side his travels in the middle of nowhere are about to be a lot less dull. You get a great scene as the two opponents as it were square off for the first time with the young man seemingly getting the better of the hitcher in round one. Unfortunately, everyone in this desert seems to be to kind for their own good as the guy sees the psycho in a car with a family. So other face-offs with this hitcher are coming up and some will be very violent indeed. A rather good thriller/horror type movie with my main complaint coming towards the end as how was he not handled better than that? Other than that you get a very good and chilling game of cat and mouse and you get a performance by Hauer that could not have possibly been beat.