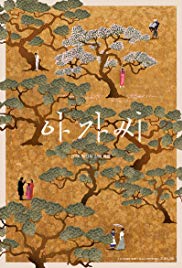 Storyline:
1930s Korea, in the period of Japanese occupation, a new girl (Sookee) is hired as a handmaiden to a Japanese heiress (Hideko) who lives a secluded life on a large countryside estate with her domineering Uncle (Kouzuki). But the maid has a secret. She is a pickpocket recruited by a swindler posing as a Japanese Count to help him seduce the Lady to elope with him, rob her of her fortune, and lock her up in a madhouse. The plan seems to proceed according to plan until Sookee and Hideko discover some unexpected emotions.
Written by
CJ Entertainment
User Reviews: I knew nothing about this film coming into it, other that it being very well considered, and that it has some strong sexual content. This is probably the best way to watch it, as I did not know where the plot was going to start or go. Essentially a con man plans to seduce, marry, and abandon a wealthy unmarried woman taking her from her uncle and then taking her money. To do this he employs the services of a young pickpocket to work as her handmaiden, and help work the plan from the inside, so to speak.

What the film does with this basic plot is enjoyable and engaging. The narrative is solid, holds the interest without effort, and is very well paced and structured. I wonder would it work as well if I had known the source material, or had more knowledge of the wider plot. As a con, the plot is solidly enjoyable and avoids the silly flamboyance of some films where such a plot would be allowed to turn into a ‘caper’. Within the plot are some surprisingly sexual elements, and these sit across the sweet, the sensual, and the dark. There is also a good amount of humor where it matters in particular in part 1 of the film, this is used well in relation to the main character.

The direction, production values, and general pacing of the film, all work together to give it a beautiful appearance and tone. It is quite sensuous to watch, with such great colors, sets, costumes, and designs. Within this the actors are all strong. Min-hee Kim and Tae- ri Kim in particular are engaging, although the downside of me being into their characters/performances was that it made the heavy nudity in some of their extended scenes feel a bit exploitative in nature. Jung-woo Ha is solid throughout, and Jin-woong Jo is just the right level of monster for the plot to work.

A richly enjoyable film, that sits across so many elements and looks so good that it keeps the plot engaging throughout.