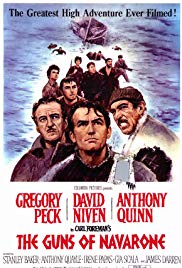 Storyline:
Two powerful German guns control the seas past the Greek island of Navarone making the evacuation of endangered British troops on a neighboring island impossible. Air attack is useless so a team of six Allied and Greek soldiers is put ashore to meet up with partisans to try and dynamite the guns. The mission is perilous enough anyway, but are the Germans on the island getting further help too?
Written by
Jeremy Perkins {J-26}
User Reviews: "The Dirty Dozen" may have updated the film’s premise for the cynical late ’60’s, but as much as I love that old hard-boiled film, even I have to admit that it doesn’t hold a candle to "The Guns of Navarone". Though it may be hard to remember now that the premise has been used so much, the impossible mission theme was NOT a common staple in action films until this movie. The question of whether or not the team is going to pull it off is, for once, not as simple as many other simple-minded movies have made it. There are moments where the mission is endangered by just about everything imaginable: the CO being critically wounded, suspicious enemies, personality conflicts, wrenching moral dillemas, a traitor in the ranks, being captured by the enemy. The storyline plays out like the most extreme manifestation of Murphy’s Law: everything that can go wrong DOES go wrong.

The team put together here couldn’t be more incongruent with each other. Gregory Peck’s world-class mountain climber who becomes the team’s reluctant CO, David Niven’s hot-tempered, authority-defying sapper, Anthony Quinn’s Greek ex-Colonel who has promised to kill Peck at war’s end, Stanley Baker’s weary soldier who’s tired of the unending slaughter, a young Greek national who wants more and more of it…the real miracle is that they manage to get as far and as well as they do. For every step forward, they wind up paying for it. Be it in blood, moral anguish, or pain, no one comes out of this mission unchanged or unscathed. I honestly feel that it is this theme of sacrifice that is the key to the greatness of "The Guns of Navarone".