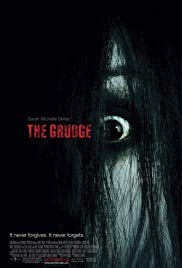 Storyline:
Karen Davis, an American Nurse, moves to Tokyo and encounters a supernatural spirit who is vengeful and often possesses its victims. A series of horrifying and mysterious deaths start to occur, with the spirit passing its curse onto each victim. Karen must now find away to break this spell, before she becomes its next victim.
Written by
simon
User Reviews: A social worker (Sarah Michelle Gellar) goes to work in a house that has a horrible power inside it. The "grudge" lingers there and tries to kill all who come into its path.

I didn’t want to see this film when it came out, and I only watched it now almost three years later because it seemed like an obligation. I think it was as bad as I expected, maybe even worse. The best actor in the film (Bill Pullman) was given such a weak part that he couldn’t have saved it if he tried.

The actor who impressed me most was Ryo Ishibashi, who played the police chief. He has been showing up in more American versions of Japanese films lately, and I can understand why. He "gets it" and can play to either audience with equal fervor.

Sarah Michelle Gellar would seemingly be a great one for horror (all those years of Buffy, and a handful of other horror films) but she never really seems to get out of the "teen movie" groove and into a more terrifying frame of mind. Ted Raimi, on the other hand, is better here than ever before. His work in "Skinner" and "The Damned Thing" was disappointing. But he was better here than he’s been since "Intruder". And Clea Duvall is always a nice touch. William Mapother (best known as Tom Cruise’s cousin) showed up, but he has never been good, not even on "Lost".

I wasn’t scared by the "comb noise" (the thing that comes out of the ghosts’ mouths), but I freely admit I put my head under my blanket during the security camera scene. Ever since "The Ring" (which this obviously rips off) I have been afraid of sinister little girls who meander towards a camera at a jagged pace. Well, that and the fact little girls in general are very scary (and more so when they grow up).

I was unclear why some of the victims were attacked (especially the sister/daughter working in the office). Her connection to the house was pretty minor. But maybe I missed something, and I’m not going back to catch it again.

If thee was any reason to watch this, it would be for Ted Raimi or to get it out of your system or for the beautiful music of Christopher Young. I don’t think many people pay attention to the score of a film, bu they ought to. Young is the genius behind the "Hellraiser" music (a good soundtrack, you should buy it). And he hasn’t lost his edge in the past two decades. No one does horror like Young. Unfortunately, even the best music does not make a film good… and this one just plain stinks.

Storyline:Richard Gaylord, Jr. is a modern Lothario who has so many sweethearts that his father does not know what to do with him. Tired of paying to get his son out of one romantic entanglement after another, the eld...