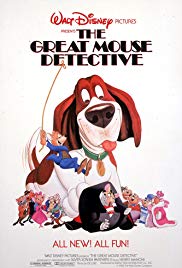 Storyline:
In Victorian London, England, a little mouse girl’s toymaker father is abducted by a peglegged bat. She enlists the aid of Basil of Baker Street, the rodent world’s answer to Sherlock Holmes. The case expands as Basil uncovers the crime’s link to a plot against the Crown itself.
Written by
Kenneth Chisholm <[email protected]>
User Reviews: The Great Mouse Detective is so underrated, it’s criminal. How does nobody know about this?! It has one of the best cast of characters in a Disney film, one of the best Disney villains ever (voiced by the amazing Vincent Price, no less), and is packed with fun and adventure.

Brilliant and eccentric detective Basil of Baker Street is given the case of a lifetime when young Olivia Flavisham comes to his doorstep for help. Her father, a gifted toymaker, has been abducted by Professor Ratigan, a notorious criminal whom Basil has been chasing for years. With the help of the young mouse and the kindly but down-to-earth Dr. Dawson, Basil sets out to rescue Olivia’s father and foil Ratigan’s scheme.

The story seems a bit plain, but the plot isn’t what makes TGMD exciting. It is the characters which bring the movie to life and make it worth watching. Being based off Sherlock Holmes himself, Basil is naturally an intelligent badass. He’s enthusiastic about his work and little else at the beginning of the film, and doesn’t care much for Dawson and Olivia upon first meeting them, but as the film progresses he starts opening up to them, especially Olivia. It’s a nice bit of character development which gives the film heart without becoming sentimental. Dr. Dawson’s warmer and less dramatic personality provides the perfect foil for Basil, and Olivia is charming and adorable without being cutesy-cutesy or annoying. But the best character has to be Ratigan, one of the great unsung Disney villains. He’s funny as hell, gleefully enjoying every bit of evil he engages in and doing so with larger-than-life style; on the other hand, he can be pretty scary too, and if he snaps, boy are you screwed. He’s voiced brilliantly by Vincent Price, who you can tell had a lot of fun doing the part.

The animation isn’t breathtaking, but it’s still good. A lot of the character animation is done extremely well, in particular facial expressions. The backgrounds are lovely and dark, perfectly giving the film the atmosphere of foggy Victorian London.

Though it’s not much of a musical, the few songs in TGMD are good. I especially like "Let Me Be Good to You", which is catchy and, when viewed in context to the film, very suggestive and adult. Hilarious. Good characters, good songs, humor, heart, adventureit’s all there. It’s no Pinocchio or Beauty and the Beast, but it’s still a wonderful movie. How awful it is that it isn’t well-known! It’s one of those Disney films you’ll still enjoy even when you’re older, and if you haven’t seen it yet, definitely check it out.