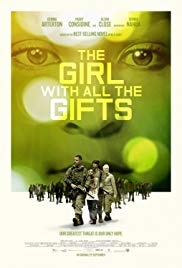 Storyline:
In a dystopian near future, humanity has been ravaged by a mysterious fungal disease. The afflicted are robbed of all free will and turned into flesh-eating ‘hungries’. Humankind’s only hope is a small group of hybrid children who crave human flesh but retain the ability to think and feel. The children go to school at an army base in rural Britain, where they’re subjected to cruel experiments by Dr. Caroline Caldwell (Glenn Close). School teacher Helen Justineau (Gemma Arterton) grows particularly close to an exceptional girl named Melanie (Sennia Nanua), thus forming a special bond. But when the base is invaded, the trio escape with the assistance of Sgt. Eddie Parks (Paddy Considine) and embark on a perilous journey of survival, during which Melanie must come to terms with who she is.
User Reviews: The atmosphere it builds, the eeriness of the children humming from the music score, how brilliantly orchestrated that opening scene or the entire first act was, are just everything you need to get excited on how things will unfold.

When the actual plot kicks in, it somewhat follows the familiar zombie/outbreak movie tropes, with them wandering around this rubble. The second act does slow things down, since the zombie’s dynamics here are pretty standard. But the subtext is what keeps it more interesting. The whole setup is basically a metaphor on how we treat the next generation: we get Gemma Arterton’s character who finds hope on the young infected girl, Melanie, while everyone else fears on how she and her kind could threaten their existence. It’s a complex dilemma that makes it tough to predict how everything would turn out. The greatest feat of the directions is how it keeps its scenarios quite disorienting, especially with its music score, increasing its disorientation. It’s amazing.

And the movie ends with probably one of the cleverest punchlines I’ve seen in film. This movie is basically the I Am Legend movie done right. This movie is based on a book and contradicting to what I said, the readers claim that the ending of this movie was mishandled. I dunno in what way, but it makes me more curious about reading it. For now, I think The Girl With All the Gifts is mindblowing. If Glenn Close fighting a zombie is not enough for you to see it, I dunno what will.

Storyline:A poetic love story that follows Manchester and Noon as they enjoy a long, hot, summer romance. Noon is our narrator, a shy taxidermist who keeps a silent menagerie in the freezer alongside Manchester's ice ...