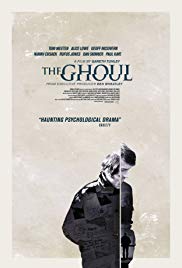 Storyline:
A homicide detective goes undercover as a patient to investigate a psychotherapist he believes is linked to a strange double murder. As his therapy sessions continue the line between fantasy and reality begins to blur.
User Reviews: Just watched a bizarre mind bending thriller "The Ghoul", that is not a horror film, although by the title, you might think so. This movie is just as much reality in the non linear plot, as it is just a fantasy going on in the lead character’s mind. Don’t expect me to explain it, one reason, many have compared it to David Lynch’s "The Lost Highway", which I don’t agree. I was able to follow it, if that is possible, by figuring what is really going on, and what is just a figment of the lead character’s mind. That’s not easy, but I like the very bizarre twists and turns the movie takes, to only end up where it started, but with many questions answered. You have to stay with it, and pay very close attention to the script as it moves along. I don’t know if I would recommend it, it’s like putting together a big puzzle, with a few pieces missing, that you eventually find laying on the floor somewhere.

Storyline:A contract killer takes vengeance against a ruthless drug cartel, resulting in a mysterious puzzle that a small town sheriff must solve in order to stop untold horrors.User Reviews:

Storyline:Two lovers are forced to split up after they scam the wrong people.User Reviews:

Storyline:An absentee father and his bipolar son are forced to live together as they struggle with a recent family tragedy. The tension and anxiety boil as they live and try to cope in a tiny apartment. As time passes...

Storyline:Barbie and her sisters go to an island paradise for a dance competition, but they must work together as a team to find their pets after their furry friends go missing at a horse festival.User Reviews:

Storyline:A legal team must work together to figure out the mystery behind a rooftop Christmas tree to keep the owner from going to jail for Christmas -- again.User Reviews:

Storyline:Stand-up legend, Billy Connolly returns in his ‘High Horse Tour’. Even at the age of 72, the legendary Scot has a wild and manic energy—and is still as sharp as ever.User Reviews: