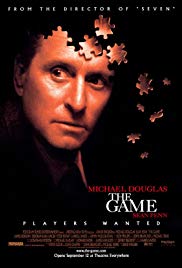 Storyline:
Nicholas Van Orton is a very wealthy San Francisco banker, but he is an absolute loner, even spending his birthday alone. In the year of his 48th birthday (the age his father committed suicide) his brother Conrad, who has gone long ago and surrendered to addictions of all kinds, suddenly returns and gives Nicholas a card giving him entry to unusual entertainment provided by something called Consumer Recreation Services (CRS). Giving in to curiosity, Nicholas visits CRS and all kinds of weird and bad things start to happen to him.
Written by
Anonymous
User Reviews: Having conquered the critics (and the box-office) with Se7en, David Fincher could have "sold out" and kept delivering more of the same. Fortunately, he was wise enough to try different paths, and although all his movies can be classified as thrillers there’s no real similarity between them, except maybe a common theme of alienation and solitude.

In Fincher’s third film, The Game, that solitude is physically incarnated by Nicholas Van Orton (Michael Douglas), a wealthy businessman who is so obsessed with his job he has forgotten everything about the simple joys of life. The only person who still stays in touch with him is his younger brother Conrad (Sean Penn), who is Nicholas’ polar opposite in terms of attitude. One night, when they’re out to celebrate the elder brother’s birthday, Conrad mentions a "game" that changed his life and suggests Nicholas participate too, as it would be "fun". Though initially hesitant, the latter eventually gives in to curiosity and decides to give it a shot. Within a few hours, however, he will regret it: the "game" is actually some sort of conspiracy involving everyone in town. With his assets frozen, his apartment no longer a safe place and no one left to trust, Nicholas must figure out how to solve the problem before it’s too late – for him or someone else…

As usual, Fincher makes sure the film works on a technical level, cleverly using camera angles, lighting (shades of red and brown being the dominant color) and editing to keep the suspense alive and the atmosphere conveniently murky. It is mainly this masterful handling of film-making tools that keeps the viewer from questioning the logic of the nonetheless brilliant screenplay, some of the twists giving the impression of a dystopic set-up rather than a plausible situation (and yet the script is supposedly based on a real event). Two other elements contribute to elevating The Game above the average mystery tale: a truly unpredictable, phenomenal ending, in pure Fincher tradition (well, at least until he made Panic Room), and the great work by the leading men, Douglas’ paranoid desperation slyly erasing all hints of typecasting (after all, this is not the first time he has played someone who is being manipulated; in fact, one scene explicitly spoofs one of those previous movies) and Penn’s smug anarchy anticipating director’s masterpiece, Fight Club, and its central character, Tyler Durden (without a doubt Brad Pitt’s best role to date).

In short, those looking for a "different" cinematic experience should give The Game a try: it might come off as overly cold or contrived at first, but like all of Fincher’s movies it deserves a re-evaluation (Fight Club wasn’t exactly a hit when originally released) and stands the test of time as one of the most original, smartest films of the ’90s.