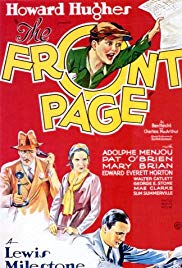 Storyline:
Hildy Johnson, newspaper reporter, is engaged to Peggy Grant and planning to move to New York for a higher paying advertising job. The court press room is full of lame reporters who invent stories as much as write them. All are waiting to cover the hanging of Earl Williams. When Williams escapes from the inept Sheriff, Hildy seizes the opportunity by using his $260 honeymoon money to payoff an insider and get the scoop on the escape. However, Walter Burns, the Post’s editor, is slow to repay Hildy back, hoping that he will stay on the story. Getting a major scoop looks possible when Hildy stumbles onto the bewildered escapee and hides him in a roll-top desk in the press room. Burns shows up to help. Can they keep Williams’ whereabouts secret long enough to get the scoop, especially with the Sheriff and other reporters hovering around?
Written by
Gary Jackson <[email protected]>
User Reviews: One of the biggest problems facing filmmakers in the early sound era was not a technical one, but one of what form the stories should take. Now that the spoken word was a means of expression, stage plays became a prime source for movie material. The only trouble was that, while the theatre is not necessarily an inferior medium, if you shoot a play simply as it is, no matter how good it would be in the theatre, on the screen it becomes static and dull. There are ways round this problem, and they demonstrate how much of a difference it makes the way in which a movie is filmed.

The Front Page’s director, Lewis Milestone, was an ostentatious attention-grabber who liked to make every use of the technology at hand. But all his showing-off was for a purpose. As oppose to the limited dimensions of the stage, Milestone is always staging things in extremes of width and depth, especially when introducing major characters. A really neat manoeuvre is when a cop visits the newsroom during a game of poker. The camera sits on the middle of the small table and pans round as each reporter is harangued in turn. A man walking round a table is a fairly low-key bit of business, but this technique makes it simply whirl. There is only one point where I feel it’s too much, when the camera "bounces" up and down on the faces of the reporters as they sing a taunting song. But the great thing is Milestone also knows when to tone it down and let the players shine. He often uses a long, still take for a key scene, such as Pat O’Brien and Adolphe Menjou’s talk at the bar.

But an equally important contribution is the sense of realistic camaraderie between the principle members of the cast. The atmosphere in the newsroom straddles comedic exuberance and realistic banter, and as such is absolutely in the spirit of Ben Hecht and Charles MacArthur’s original work. Adolphe Menjou shows impeccable control, with movements that are almost cartoonish, such as the little backward lean into his stride off after announcing "I’ll kill him!" It’s a fresh approach, but one that would catch on, being very much the vein of Clark Gable’s Oscar-winning performance in It Happened One Night (1934). Lead man Pat O’Brien is at his most extrovert and, in the process, his most likable. Walter Catlett is unflappably brilliant, and there is also a chance to see Edward Everett Horton honing the persona that would make him a fixture throughout the next decade.

The result is probably the most vibrant and effective stage adaptation of the early talkies, and it set the tone of much of what was to come, straddling the gap between the wild farce of the Marx Brothers and the sophisticated comedies like Dinner at Eight. Later directors (George Cukor, most notably) would learn to tone down Milestone’s approach and create stage-to-screen adaptations that flowed smoothly and were purely cinematic, but The Front Page was nevertheless an important jolt to an industry still trying to find its way, and a lesson in how to make a script low on action and confined in space into something dynamic and brassy.