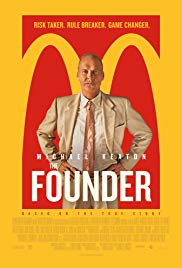 Storyline:
1954. Having worked as a salesman most of his adult life, Ray Kroc has been a hustler in most senses of the word. That hustling has made him the target of derision among certain circles for peddling what have ended up being more novelty or faddish than useful products, but it has also placed more than a comfortable roof in Arlington Heights, Illinois over his and his wife Ethel’s heads. Ethel, however, wishes that he placed as much effort into being at home with her than he is in selling, his current job of peddling five-spindle milkshake makers for Prince Castle which has him constantly on the road going from one drive-in restaurant to another. It is because of the beefs he has with the whole drive-in experience (bad food, bad service) in constantly eating at such establishments while on the road that he becomes enthralled with the concept of McDonald’s Restaurant in San Bernardino, California, it owned and operated by brothers Richard McDonald and Maurice McDonald – Dick and Mac. …
Written by
Huggo
User Reviews: Biographical dramas tell stories about significant people in history but they are always much more than that. The person chosen for the bio-pic reflects something about the values of the era and the society from which they came. In this sense, The Founder (2016) goes well beyond the story of a global hamburger empire to the values that made McDonald’s possible and it does not paint a pretty picture. The mantra "persistence is everything" is heard at the beginning and the end of this film but when decoded it means persistent treachery, greed, and a code of ethics toxic enough to remove some gloss from the world’s most recognised golden arches.

The real founders are brothers Maurice (John Lynch) and Richard McDonald (Nick Offerman) who pioneered the idea of standardised burgers made quickly that led to the modern fast-food industry. Into their lives came Ray Kroc (Michael Keaton), a struggling milkshake-mixer salesman who is amazed at the queues of people lined up for burgers and fries. The brothers trust Ray, tell him their secrets, and in 1954 Ray becomes the franchise manager responsible for setting up new stores. Driven by insatiable greed, Ray wants to go national but the brothers fear loss of quality control. When Ray realises that owning the property on which stores operate gives him complete control of the business, his takeover plans are rolled into place.

The storyline follows the facts of history but it is the film’s characterisations that are its real achievement. Perhaps best known for his extraordinary performance in Birdman (2014) Michael Keaton is in a class of his own when it comes to portraying deeply flawed people living on the edge of sanity or evil. From the opening scenes his eyes express callous disregard for others, and at one point he boasts that if a competitor was drowning he would not hesitate to put a running hose deep down the victim’s throat. His flawed humanity is contrasted by the authenticity and honesty represented by the brothers. Excellent casting, directing and period sets make this a thoroughly engaging story.

This film also arrives with remarkable timing given the current global spotlight on the home of capitalism. Millions of McDonald’s fans are regularly processed by one of the most sophisticated marketing machines on the planet. Seeing The Founder is a bit like finding out that Santa Claus is Satan in disguise. Good cinema not only entertains: it shows the world as it is, not as we believe it should be. The Founder tells a story that should be told, and it does it brilliantly.